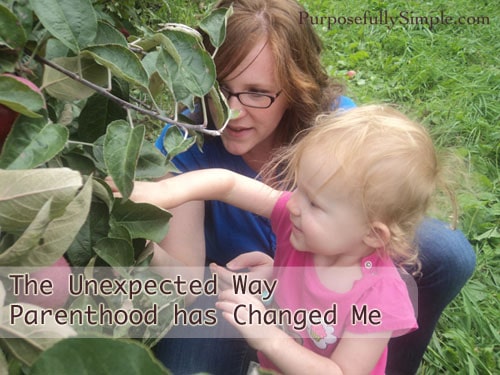 “Do I look Fat?” I asked Matt while holding my hand on my stomach.

“No, you look great,” He said (smart man!) but his approval of the way I looked was not enough to make me stop worrying about it.

Later in the day I once again placed my hand over my stomach and gave myself a snarl as I worried that my pants were just a little more snug than I’d like. Just at that moment I heard a tiny voice say “fat” and I looked up and there was Olive, watching me and repeating a word I had used earlier while making the same gesture.

Of course I know she watches me and I know she’s been observing and learning from me since birth but I didn’t realize that she was watching me at that moment. She was learning and internalizing even when I wasn’t demonstrating the lessons I want her to learn (self confidence and internal validation). She was observing even when I was demonstrating the opposite of what I want her to learn (self hate and seeking external validation).

I remembered an article I had read about when a little girl learned that her mother was fat, ugly and horrible (it’s definitely worth a read so hop over and take a look when you get a chance). The author writes:

Years later, I looked back on this conversation and the hundreds that followed and cursed you for feeling so unattractive, insecure and unworthy. Because, as my first and most influential role model, you taught me to believe the same thing about myself.

I’m just going to say it: It’s effing HARD to be a woman in this media rich society. (It’s hard to be a man too but for other reasons and maybe that’s a post for another day?)

We (women) are told that our worth is in direct proportion to how attractive we are to men.

Then we are told that there is an ideal body—typically tall, thin, and white, with large breasts and we realize that we don’t fit it, because really, that one body type or appearance is only one of many, thus a small percentage of the population can say they fit the “ideal”.

Then the women who do fit that description get hate from the rest of us for being something we cannot be.**

What if we—women of all ages, shapes, colors, marital status’, sexual orientations, and mothers or non-mothers—what if we all stopped getting down on ourselves about our appearance? Especially in front of impressionable young eyes, but, everywhere else too.

What if we stopped placing our entire worth in our appearance?

What if we, instead of making our comfort or discomfort about how we look, make it about how we feel, physically and mentally? (Instead of “I look fat” we say “I feel less healthy than I want to be”.)

Most importantly, what if we all stopped attacking each other because of our own insecurities and instead joined together to help the next generation of young girls learn that they are, of course, beautiful but also that they are also much more than their appearance?

Would there be fewer young girls having sex (and getting pregnant) just to please their boyfriends?

Would young men begin to believe that women are integral parts of society not just objects to look at and gain sexual gratification from?

Would men stop feeling like they are entitled to a flawless woman and instead work on their own character and become a man worthy of marrying?

And would women start to realize that their appearance isn’t the only thing that a man is looking for and that they too should build their character to become a woman worth  marrying?*

Would they, as a couple of mature adults, demand media that accurately represents men and women? Our dollars are our best vote after all.

Is it then possible that we can help stop teen pregnancy, sexual abuse, sexism in the workplace, and ultimately how women are portrayed in the media? All by being kinder to ourselves?

Wouldn’t that be awesome?

But how do we do this? How do we reverse a trend that is so ingrained in us?

These are the steps I’m taking to try and reverse my negative self-talk and become a better role model for my daughter:

I am already becoming aware of how often I ask for validation from Matt or think badly of myself.

I stop myself when I have negative thoughts and assess their accuracy. (Am I really “SO fat” or did I just gain a few pounds? Can I increase my exercise and lose it again? Probably!)

When I challenge my beliefs and realize they aren’t accurate I adjust my thoughts to be more accurate. I also try to point out what things about myself are “good”. (“Well, my pants are a bit tight, but my hair looks nice today”).

I believe that when self-image improves we don’t have to spend so much time thinking about it (because we know we are beautiful!) and we will begin to see all of the other amazing things that we are (smart, caring, good at our jobs, etc).

It’s not easy, but changing my attitude towards myself has been an amazing gift. It’s something that everyone in my family can benefit from and something I may not have chosen to do had I not become the mother of a wonderful little girl that deserves the very best role model.

What do you think? Has parenthood changed you in an unexpected way?

*For simplicity sake I used a heterosexual relationship as an example. Homosexual relationships add a whole new layer to how men and women are portrayed in media and would be a whole separate post. I also assumed that these people want to get married. If they don’t that’s cool too. I’m just trying to illustrate a committed relationship.