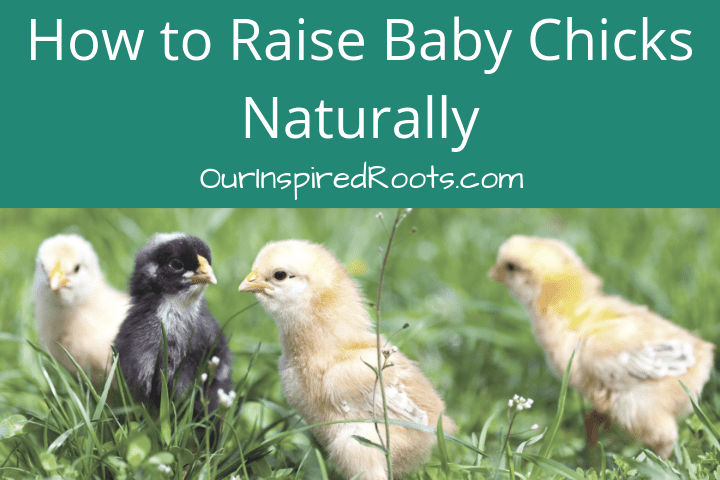 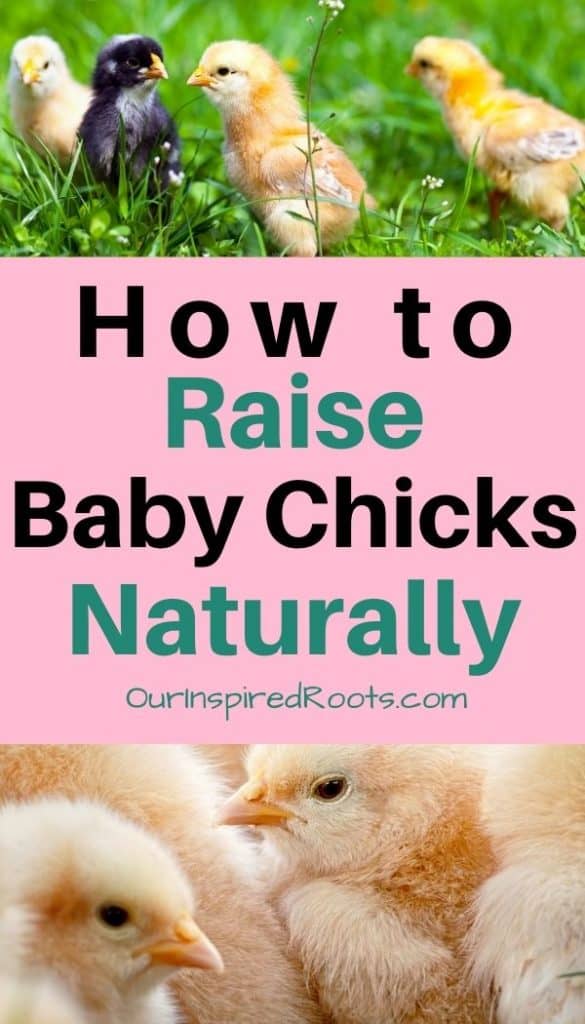 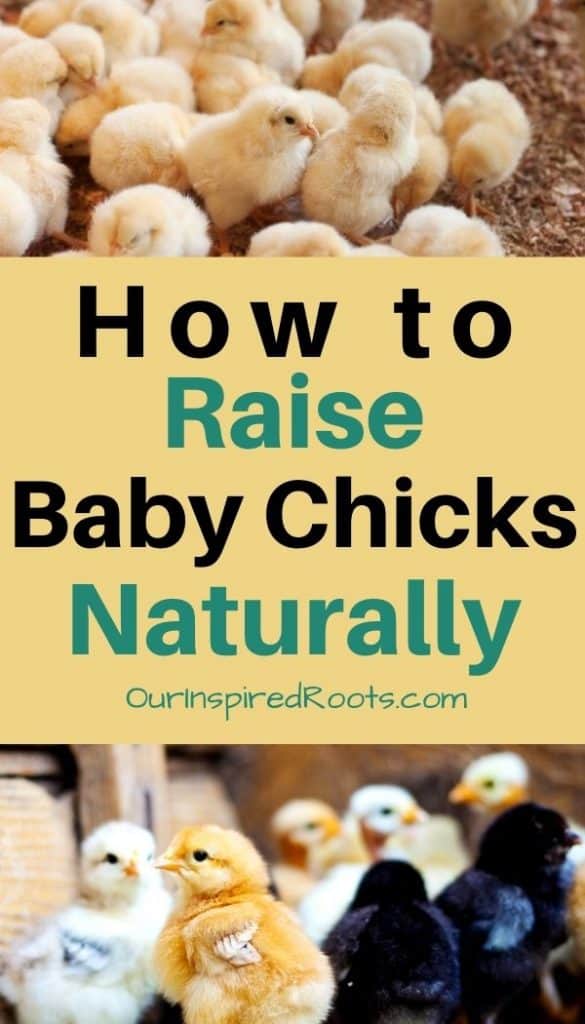 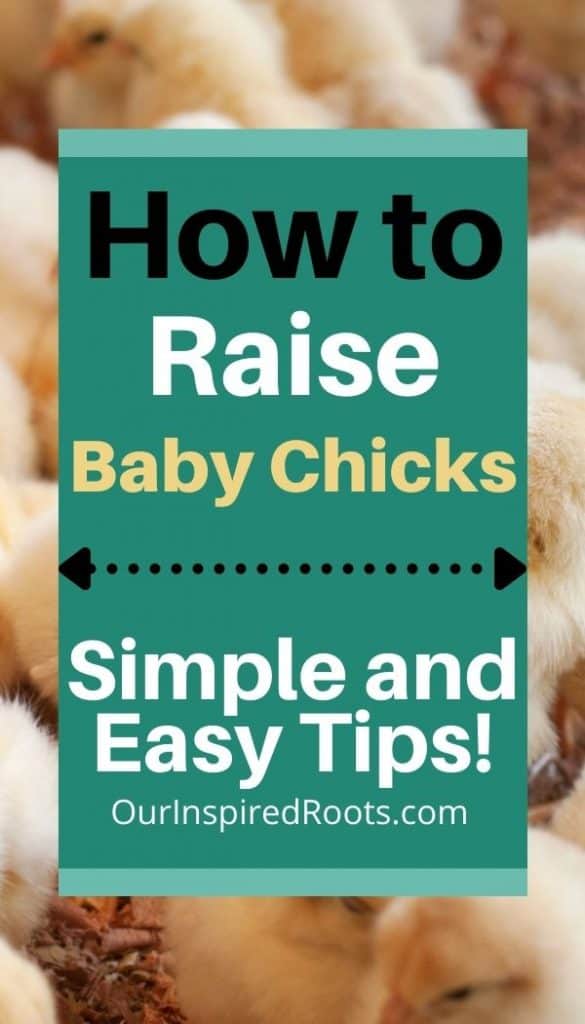 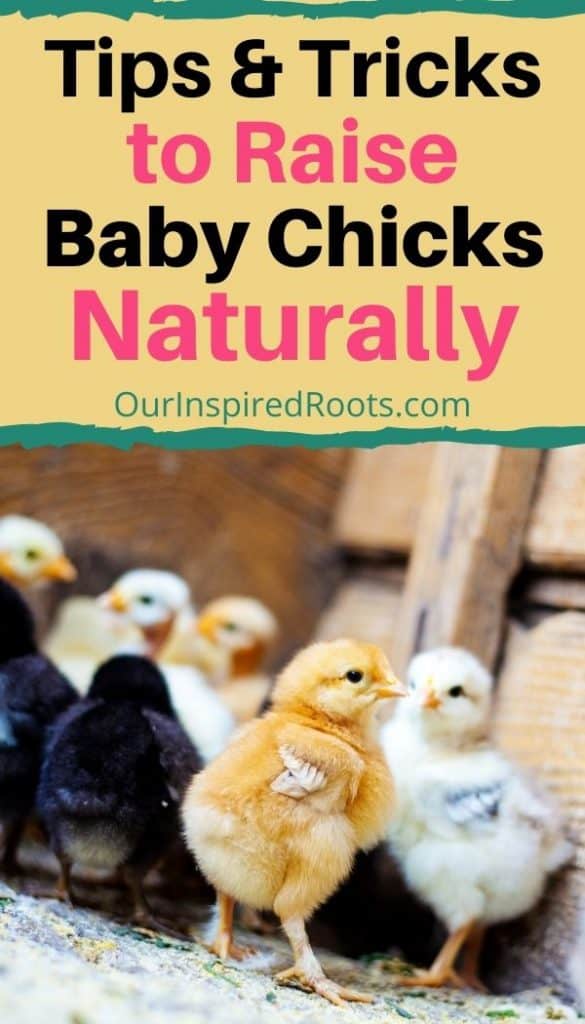 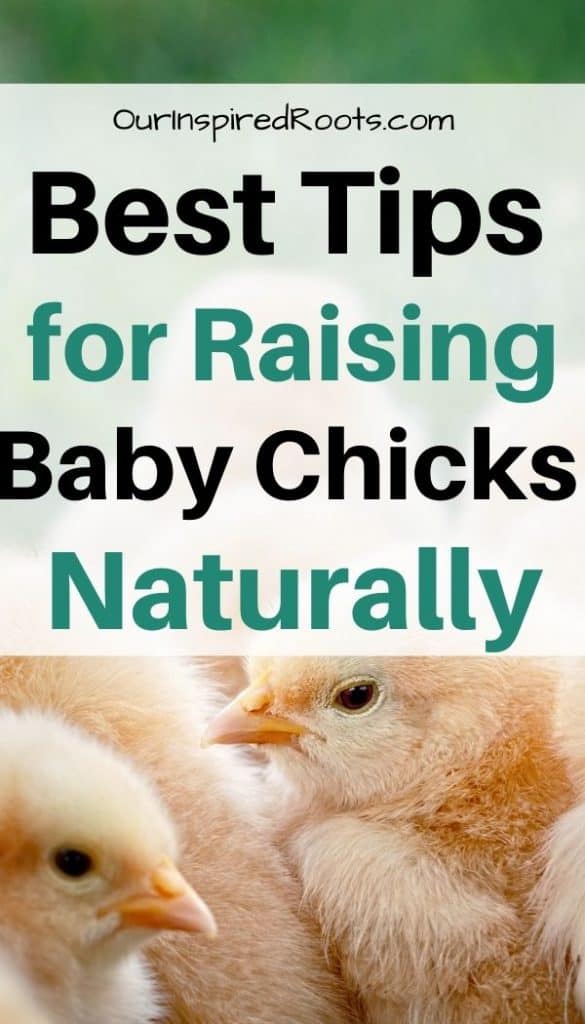 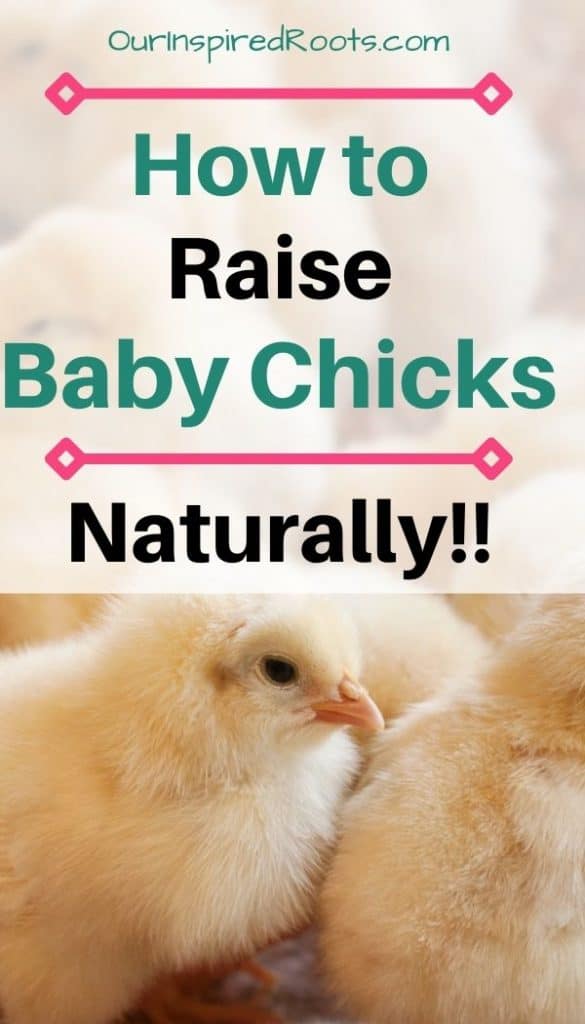 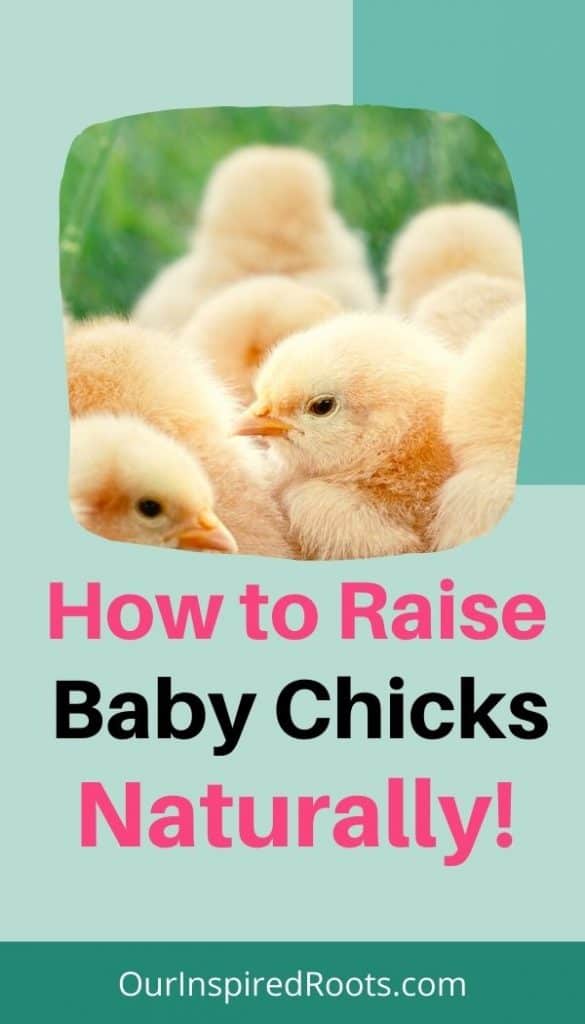 There’s a huge backyard chickens movement going on and for good reason. Raising baby chicks and growing your own eggs (among other foods) is a great way to know where your food is coming from and that it’s truly healthy.

But many people are reluctant to get started because they’re worried they won’t do it right.

First, whatever you do as a thoughtful, caring person will be infinitely better than what happens to a battery hen.

Secondly, if you’re wanting to raise baby chicks naturally I’ve put together an ebook for you. When I first started out I wanted a guide that would tell me how to raise chickens in the most humane and healthy way. So I created a resource for those of you that also want to raise chickens naturally. 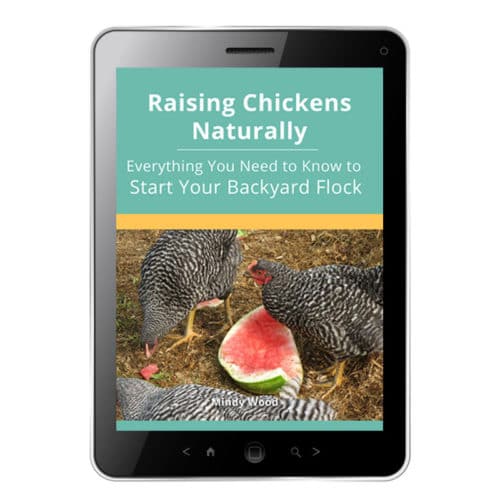 Below are some of the things I cover in my eBook!

Or read the post below! (Note that the video still has old branding on it. It IS mine, but with old branding from before I changed my blog name :))

Where to Get Chicks

There are a number of places you can find chicks but the local farm store is probably the most obvious and most popular place. Other choices are a local homesteader, a breeder (online or locally) or a friend.

Read this post to learn more about where to get your chicks and the pros and cons of each method.

Should I Get My Chicks Vaccinated?

For my small backyard flock I don’t think either vaccine is always necessary. You can always check your local agricultural extension office for the scoop on how prevalant Marek’s disease is in your area. I allowed the Marek’s vaccine however, since I didn’t have time to figure out if it was a problem here.

The Coccidiosis vaccine is one I don’t believe I’ll ever get for my chicks. it is a live vaccine (not weakened) and may actually cause illness. Again, for a small backyard flock, I don’t believe this is necessary when keeping the brooder and coop clean and dry works as excellent prevention.

Also, you can prevent cocci with medicated feed if you want (I don’t). If you do get a cocci vaccinated chick, don’t feed them medicated feed because it can nullify the vaccine (more on that in the feed section).

When to Buy Chicks

If you’ve decided to try raising baby chicks you may be wondering when you should jump in. When you choose to order or pick up your chicks is up to you. Typically chicks are available here in New Hampshire in spring and early summer. In places that are warmer, I believe they are available even year round.

I have always waited until around may to get my chicks because it’s warmer out and I don’t like to keep the chicks inside any longer than necessary. In a warmer climate you may choose to get chicks earlier because then you’ll get eggs sooner (chickens begin laying at around 6 months old). 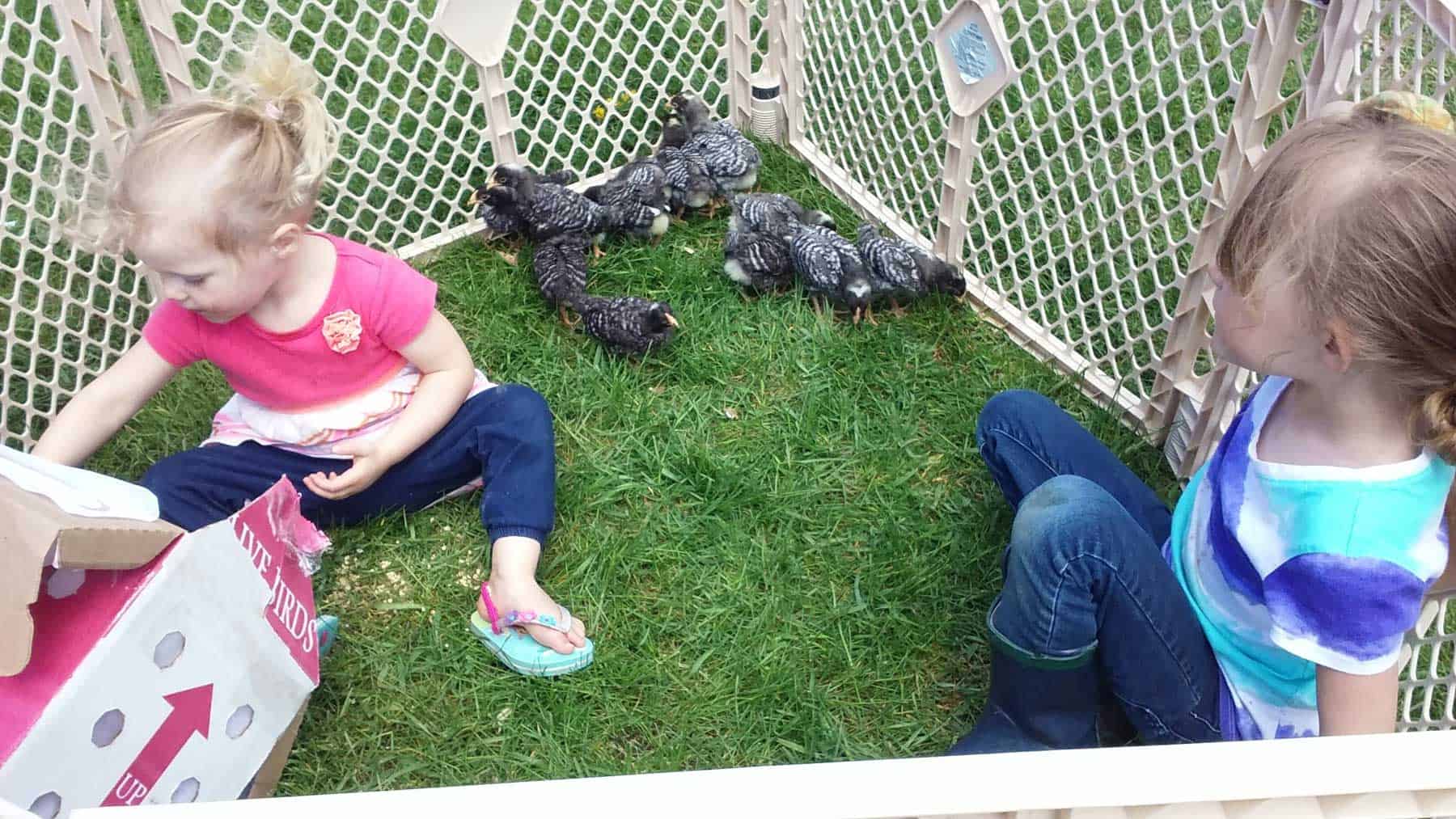 The first thing you’ll need before you bring your chicks home is a brooder. This is basically just a container for the chicks to live in until they move outside. When it comes to size there are differing rules of thumb. Some say .5 sq. ft per bird others say 2 sq. ft. You’ll see that chicks grow awfully fast and that the more room you can give them the better. I think at least 1 sq. ft per bird is good.

I’ve used cardboard boxes in the past when we only got 4-6 chicks at a time but this year used a large round container we found in the barn for our 12 new chick. You can buy containers that are made specifically for brooding chicks like this one.

The best choice if you are going with more than 6 chicks is something without 90 degree angles (like the one I linked above) as chicks can pile on top of each other and get squished in the corner.

When you get your brooder container you’ll need to add some bedding to absorb the poop and smells. The easiest choice is pine shavings which you can get at your local farm supply store.

Like I said earlier, those little ladies will grow fast and will start trying to jump out and fly out of their brooder. The best way to deal with this is placing a netting material over the top so that they have air flow and light but can’t get out. We used something like this one.

Also consider where they’re going after the brooder, they grow fast. If you don’t have a place already set up for your chickens you’re going to need to hustle to get it ready in the next few weeks. that’s why I always recommend having a coop ready or almost ready before bringing home your chicks. 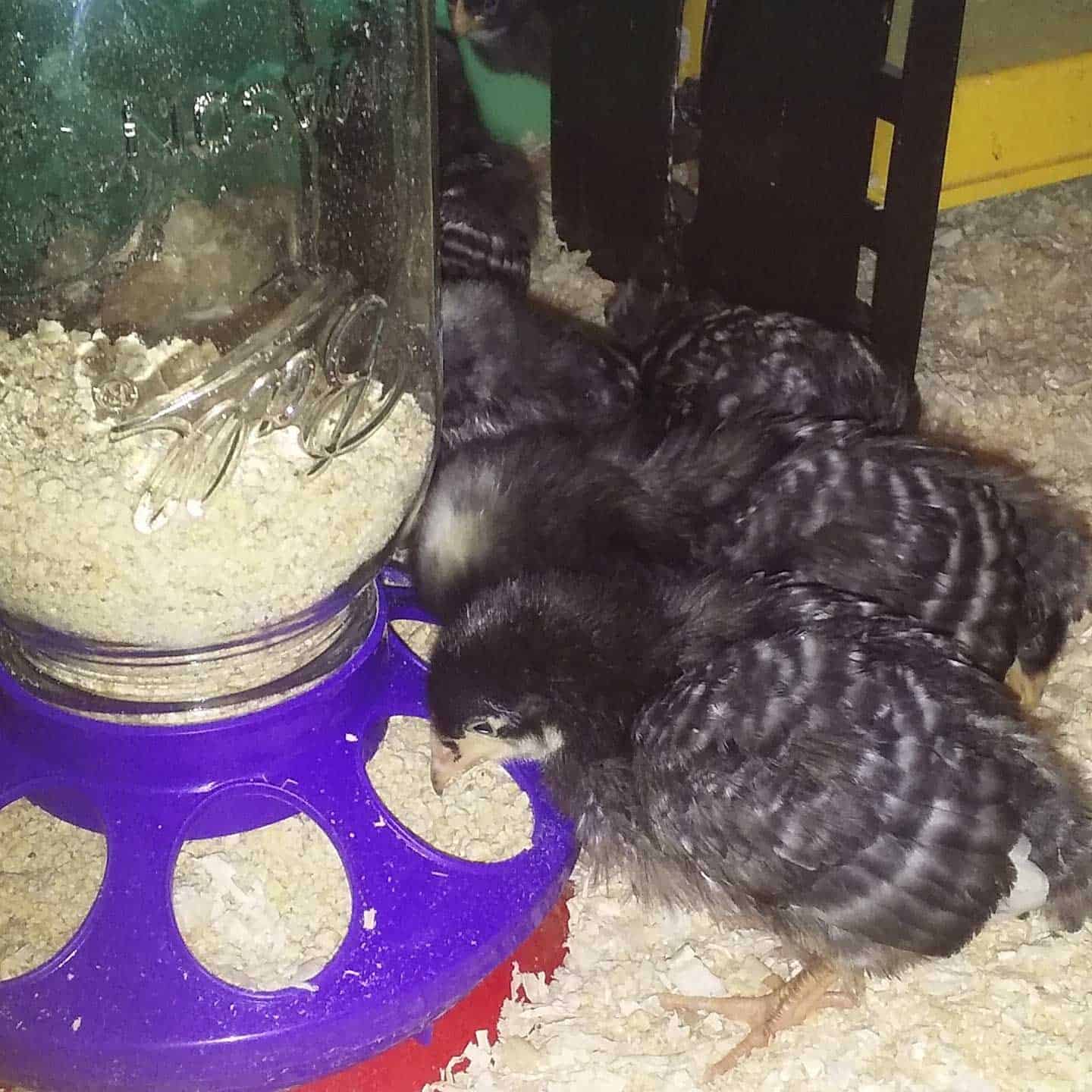 Raising baby chicks naturally is going to rely heavily on your feeding practices. If you buy cocci vaccinated chicks you must feed them a non-medicated feed.

I prefer organic feed (which is unmedicated) because I don’t like the idea of feeding my chickens GMO’s which could affect their future eggs (that my family then eats).

I go with organic chick starter/grower crumbles and feed the chicks that until they are about 5.5 months old. Then I feed an organic layer pellet. Another option is to go with a starter mash until about 6 weeks then switch to the starter/grower crumbles. You can mix your own feed but that’s more of an advanced feat to take on.

To cut costs I feed kitchen scraps and foraged feed as much as possible. I put their food into a chick feeder to avoid them climbing in and pooping in the food or scratching it out all over the place. You can buy a plastic piece for the food or just use a quart mason jar as I do.

Chicks need lots of clean water. Be sure to get a chick waterer like this one (I screw it on a quart mason jar too) so that your chicks don’t fall in and drown.

For new chicks just arriving in the mail (or at any other time they might be extra stressed) I like to mix up some power water. I add a clove of garlic (crushed), a tablespoon of raw honey, and a tablespoon of apple cider vinegar (ACV) to a quart of fresh water.

I change this out daily for the first few days. The garlic is antimicrobial and an immune booster, the ACV is antiseptic as well and contains some probiotics while the honey gives the chicks a boost of energy.

Lisa Steele at Fresh Eggs Daily does something similar with garlic-infused ACV which she adds to her chickens’ water. She also includes herbs like oregano or thyme which I think is a great idea I just haven’t tried it yet.

Probiotics and electrolyte – You can add these to their water as well. I’ve used a commercial formulation like this but I’ve also added a capsule of my own probiotics when I was out. There are also recipes for DIY electrolytes you could try.

Chicken grit is small rocks that chickens swallow that help them to “chew” their food. Many experts say that if you’re feeding a commercial feed like a mash or a crumble (or even a pellet) there’s no reason to give grit as it breaks down easily. This may be true but I feel like there is no harm in providing grit, so why not?

Also, if you’re going to give anything other than commercial feed like grass or other greens, or kitchen scraps you must provide grit. There are 3 different sizes you can buy, starter, grower, and layer.

Starter is good for chicks in the first 6-10 weeks or so. Check the bag for the exact age but don’t worry too much about it. If your chicks go outside they are likely picking up their own grit as well.

When it comes to raising baby chicks the temperature may be the most important aspect. Baby chicks need to be kept warm and can chill easily. A chicken’s normal body temperature is actually around 105-107 degrees F.

A baby chicks body temp is about 103.5 F when it’s born. They need to be kept very warm! Many people use heat lamps for this task. I have never used a heat lamp. I use the Brinsea Eco Glow which I feel is much safer and easier to use.

The idea is that the Eco Glow acts like the mother, a warm place chicks can go under when they are cold. Chicks will naturally spend more time away from their heat source (mom or the Eco Glow) as they get older and begin growing feathers.

It works out really well because there’s no need for a thermometer to check the temp or to be super vigilant about whether the heat lamp is too close or too far. As long as it’s over 50 degrees in the room the chicks are in the Eco Glow is plenty for them.

It’s also great because there is no light to bother the chicks when they are sleeping. It feels like the next best thing to a broody hen!

Now that you have all of your supplies for raising baby chicks it’s time to get set up. Remember, always have the brooder set up before picking up your chicks!

When your chicks arrive home:

Raising Baby Chicks: What to Look Out For

Though raising baby chicks is pretty straight forward, there are a few thing you need to watch out for. Anytime your chicks are acting strange or sick it’s a good idea to investigate. Here are two big things to look out for.

This is what you’ve either chosen to vaccinate against or not.

Symptoms according to The Poultry Site:

If you suspect cocci, separate the chick right away and follow the directions in this post for treatment.

Pasty butt is basically just poop stuck over the vent, though the chick may also become listless or otherwise look unwell. If you notice pasty butt you must act right away because if a chick can’t poop it could die.

Here is a great post on how to take care of pasty butt, plus a video.

I have to say, the only time we have ever dealt with pasty butt was when we had to use a heatlamp because our Brinsea Ecoglow power cord was missing. I

Ready to Get Started?

In this book, you’ll learn all the information you need to begin raising chickens for eggs, right in your backyard (from fluffy chick to first egg and beyond!). 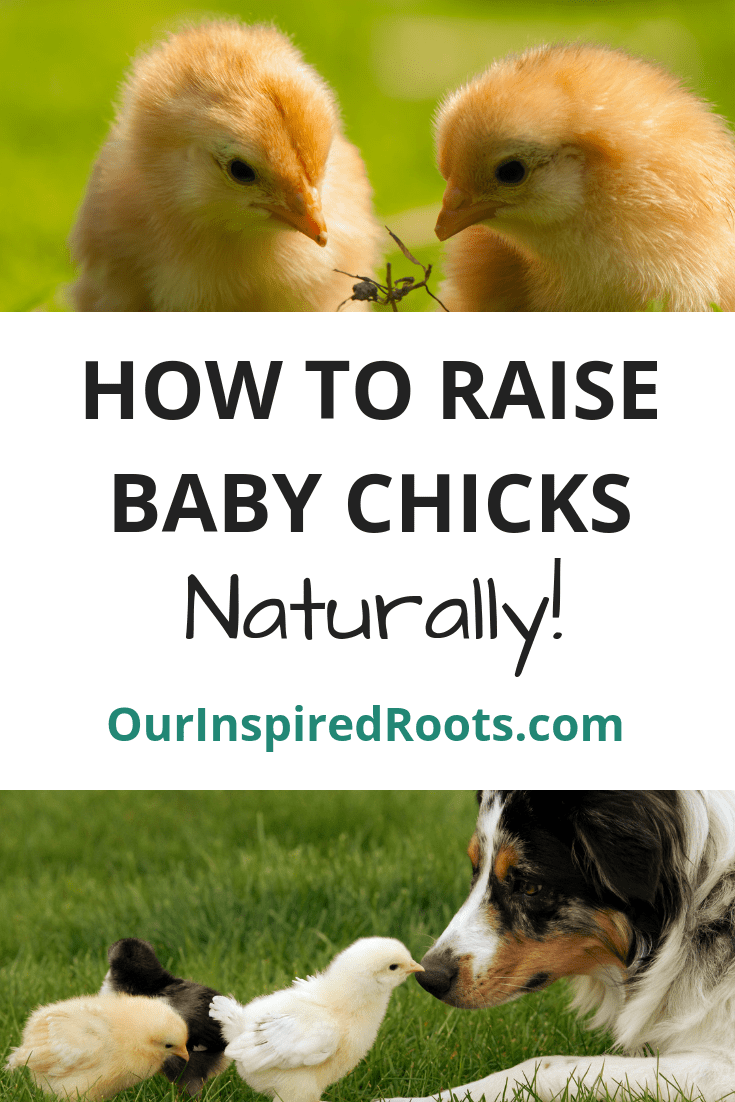