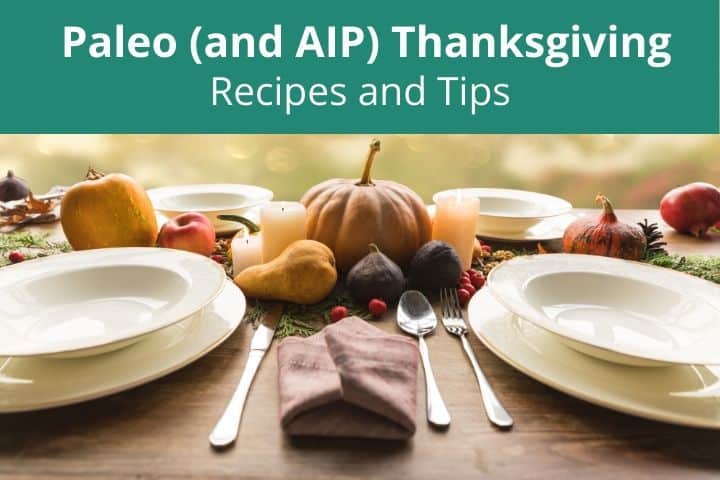 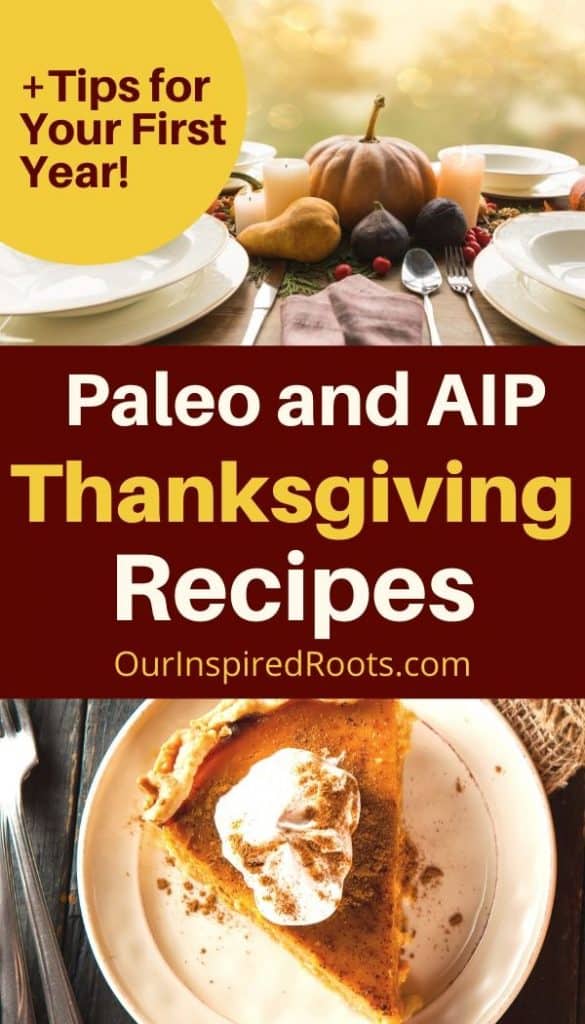 If this is your first paleo Thanksgiving (or AIP Thanksgiving), did you feel a sudden panic when you realized the holidays were on the horizon? I did! Desserts treats and seasonal food are just so much fun to indulge in!

Sometimes, I start to feel left out but then I remember that because of my AIP diet I have energy I’ve never had before. I can eat a meal and not need a nap. I don’t have to be on multiple medications. Life is good! (even if it’s different).

But it’s still tough feeling deprived when others get to indulge. Luckily there are ways to get through the holidays without feeling completely left out (or getting sick).

Remember that there are plenty of tasty paleo (and even AIP) treats and non-treats. In fact, if you’ve been eating a paleo diet even for a short time or have been eating a real-food/clean diet you likely wouldn’t like the processed foods (think green bean casserole and boxed stuffing) that feel so integral to the American Thanksgiving table.

Many of the things we think of as traditional Thanksgiving foods — turkey, homemade stuffing, pumpkin pie, cranberry sauce — actually aren’t. Those ideas of Thanksgiving are based on Victorian era nostalgia according to Plimoth Plantation rather than on what they actually ate at the first (or first 100) Thanksgiving.

If Thanksgiving food is always changing then why can’t you just make your own Thanksgiving traditions? You can!

What did the pilgrims eat at the first thanksgiving?

Though we know that the real first Thanksgiving was likely nothing like what we have now (or even what we always thought they had then) what they actually ate is hard to know for sure. It was likely a combination of seasonal vegetables and available meat (some accounts say it was venison and waterfowl). Settlers wouldn’t have had access to wheat and maybe not dairy either. The first Thanksgiving was a paleo dinner! (or close to it).

So, if you’re feeling down about having to skip the pie or stuffing, you may feel better knowing that even the Pilgrims didn’t have pie crust. And what we have that the pilgrims didn’t is the plethora of delicious paleo and AIP pie crust options so we don’t have to feel deprived (more on that below).

If you’re making your own paleo Thanksgiving dinner then you’ll need a plan. Luckily it’s not as hard as you may think. A roasted turkey is pretty paleo already. Stick with healthy fats (olive oil, coconut oil, lard) and you’re good. For AIP you’ll also need to stick with herbs and forgo spices like paprika and black pepper.

Side dishes can be roasted or steamed vegetables with healthy fats and herbs. What are your favorites? You can turn just about any dish into a Thanksgiving dish by using herbs like rosemary, sage, and thyme, or adding cinnamon, ginger, and cloves. Desserts are a little more complicated but there are lots of excellent recipes below. At the very least, cooked fruit with maple syrup is an excellent treat.

Going to someone else’s house?

If you’re paleo and don’t have obvious reactions to non-paleo foods then consider the 80/20 rule. Stick with turkey, veggies, and the dish you bring and don’t worry if you have a bit of canola oil or other non-paleo ingredient this one time.

If you are AIP and really can’t have certain ingredients, talk with your host before hand. Ask them to use olive oil, salt, and herbs on the turkey and then bring your own side dish and dessert. Luckily I’m going to my parents house so this is easy for me. I also don’t want to make a whole second meal to bring along so I’ll be eating a limited meal but it will be excellent (and I think I’ll make two AIP desserts, because- Thanksgiving).

If you’re the sort who would rather just print out a few recipes and get started, here is a list of yummy paleo and AIP recipes to make a perfectly rounded thanksgiving meal. If you want more paleo holiday-themed recipes, check out this cookbook by Danielle Walker of Against All Grain which features celebration recipes for the whole year.

“Cheese” and Charcuterie Board (AIP)

If you’re like me and want to stick to a healthy diet even during the holidays, these recipes can help you do that. What’s great about them is that you can offer additions like cheese for those who aren’t paleo to give some variety and choices to your guests. Also, check out more recipes for Paleo Christmas meal planning.

What about your paleo Thanksgiving? What are you cooking? How do you find ways to indulge?