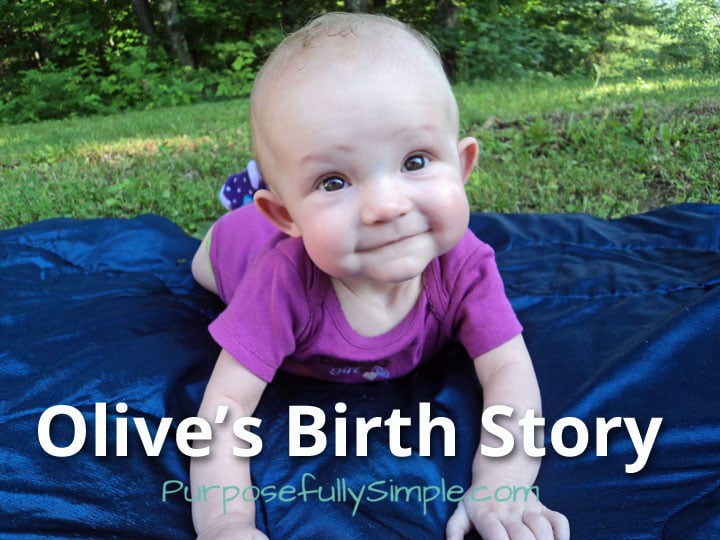 As you know, from the first part of this story I wanted a natural birth at a birth center but had to go to the hospital to be induced because of preeclampsia.

Arriving at the Hospital

After being evaluated the doctors believed that my condition was bad enough that they wanted to induce me immediately, rather than wait until that evening as they usually did. The Cervidil, used to ripen my cervix, was supposed to take 12 hours to work, which would have put me in labor at around 2am.

My husband Matt and I were then left in our room to wait. A short time later I started feeling incredibly crampy. It got to the point where I had to sit up to get through it. I thought that I couldn’t possibly be contracting yet and I didn’t want to be embarrassed by calling in the nurse and having her tell me it was nothing so I waited. Finally I realized that I was breathing through the pain so we called the nurse in who told me that I was definitely contracting.

I got on the birth ball and had another contraction while they were taking my blood pressure. This one was intense and I started to feel nauseous and like I was going to pass out. My blood pressure was very low and the baby’s heart rate went down.

The nurse told me that I was having a reaction to the Cervidil and that they were going to take it out.

After the Cervidil was removed my contractions kept coming steadily and the nurse said that I might not need Pitocin!

The nurse had me lay down on my left side to try and control my blood pressure but lying down made my contraction unbearable.

I said, “I Can’t lay down, it hurts too much,” as I pulled myself into a sitting position.

Sitting up was the only way to manage the pain. First I was in the glider which was great because when I had a contraction I could rock through it and rest in between (I often nodded off).
The next place I labored was sitting on the bed and after that I moved to the birth ball. Between those two positions I was given Pitocin because my contractions were not consistent enough and they wanted me to progress faster. Looking back it’s hard for me to know whether this was the right choice or if it was an unnecessary intervention. Because I was sick I felt like I had to let the doctors do their job but I also was worried that they would over do the interventions.

While I was on the birth ball the contractions were getting stronger. My midwife, Kate, was sitting in the rocker and Matt was behind me.

The pain moved to my hips and the only way to get through the contractions was to have Matt push hard on my hips through it. The whole time I was in labor they were tracking my blood pressure but while I was on the birth ball I could tell it was getting dangerous because the machine was beeping every time they took my blood pressure.

The doctor came in and told me she wanted to give me a medicine to help my blood pressure and I agreed. This was on top of the magnesium sulfate I was already on (which made me feel ill and like my skin was on fire). At this point I was 6cm dilated.

Hard Labor (isn’t it all hard?)

After a while the doctor came back to check me and I was still 6cm. When she came back again she said that they wanted to get the baby out as soon as possible for my health and the baby’s. She said that if I hadn’t progressed further they would want to do a C-section.

At that moment I felt defeated. A C-section was my biggest birth fear but, at the same time, I was so exhausted that, for a moment, I accepted that a c-section was in my future. I thought that at least it would be over and the doctor would be the one doing the work.

Having taken a birth class, and preparing with some hypnobirthing relaxation techniques I was managing labor really well. I think being prepared was the one variable that got me through this tough, induced, pitocin augmented, medicated (though not pain medicated) labor.

I wanted so badly to make this one count, to avoid a c-section that was just around the corner, so I relaxed my body as much as I could, envisioned ‘laborland’ with fields of blooming flowers and imagined my cervix opening huge.

When the doctor checked me she said I was 9cm! I was so relieved!

Everything happened quickly from then. After one of the next contractions Kate asked me, “Was that a push?”

I realized, yeah, I think it was, so I said “maybe…” and I told her I felt like I needed to poop. I knew I didn’t really have to and that it was the baby coming down but Kate didn’t know that and suggested the toilet to push on. Sitting on the toilet was the most uncomfortable place to labor! I yelled from the bathroom “I don’t want to be in here!”

Kate said to come out then. I came out and the nurse suggested kneeling on the bed and using the back to hold onto. When I got up on the bed with everyone crowded around I could feel Matt’s nervousness like “wow, this is really happening”.

Once the nurse realized I was pushing and called in the doctor there was a lot of stressful energy in the room. At one point I said, “I’m scared”, because I was scared. All of these people were standing over me and around me as if they were ready to pounce. Then I heard Kate say, “it’s ok, it’s nature”.

They got me a birth stool. Kate said it would be good for me. I pushed on the birth stool with Matt behind me. It was perfect. I felt like I was right were I needed to be. But the doctor came in and said she didn’t want me pushing on the stool anymore, she wanted me on the bed so she could see.

When I got on the bed I was disappointed because it was much more painful but I had no choice. I pushed and it felt like there was no way I could not push. It was like I pushed a little and my body took over and made me push harder and deeper. I had heard that women usually prefer pushing because they feel like they have some control. For me pushing felt like I had no control because my body just took over.

Every time I pushed and screamed everyone told me how great I was doing.

A pediatrician came in and introduced himself. He told me he would need to take the baby away to evaluate because there was meconium in the water, which could be dangerous for her. I looked at Kate and she, seeing my distress, asked him if he could evaluate the baby while she was on my chest but he refused. 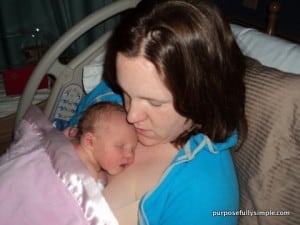 Kate asked the nurse to get a mirror for me so I could see the baby crowning. She also told me I could touch the baby’s head. Touching her head was such a weird feeling and something I’m so glad I didn’t miss. I am so grateful to have had Kate there. She really worked to make Olive’s birth a good experience for me.

I pushed for only about 10 minutes before Olive came out. I was disappointed that the cord was cut immediately and the baby taken away from me. It’s disappointing that my first memory of her is her cute little cone head being taken away.

My mom later told me that she went over to make sure the baby really was a girl like we had seen in the ultrasound.

When Olive was finally placed on my chest I was in heaven. This beautiful little baby looked up at me and I fell in love.

Read about how this birth story helped me heal.