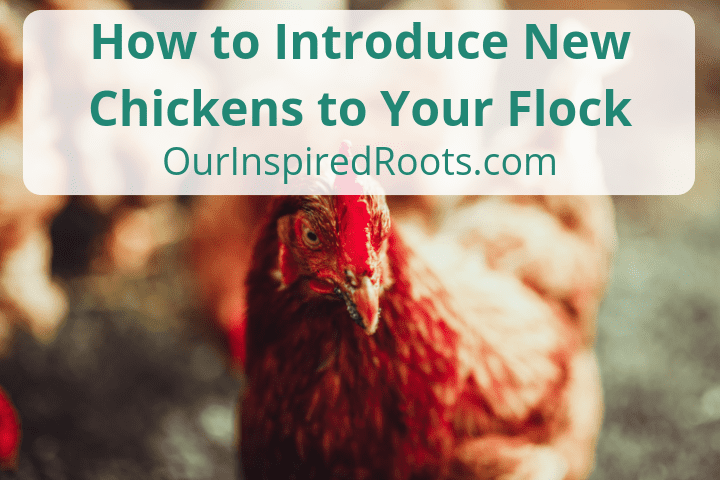 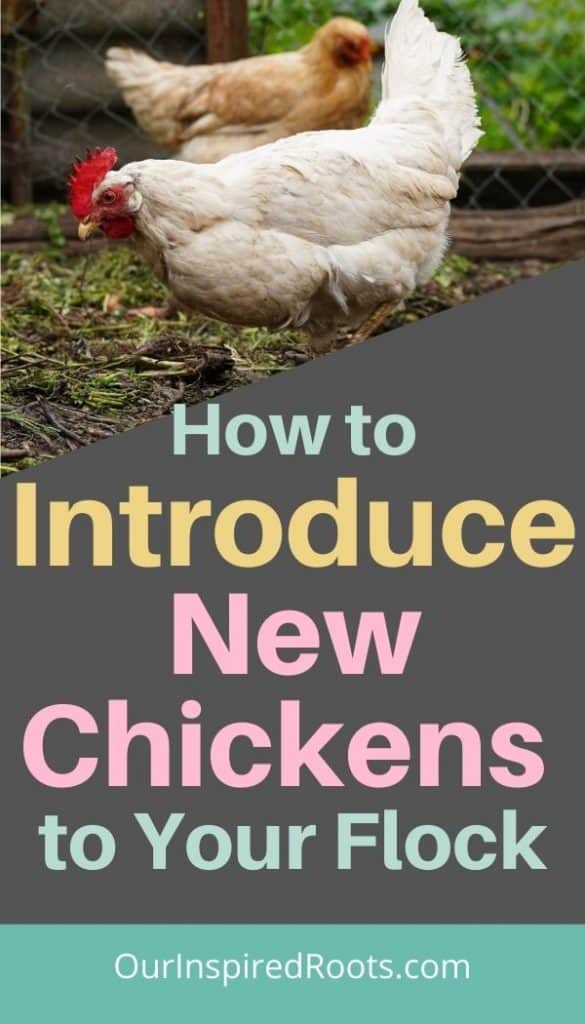 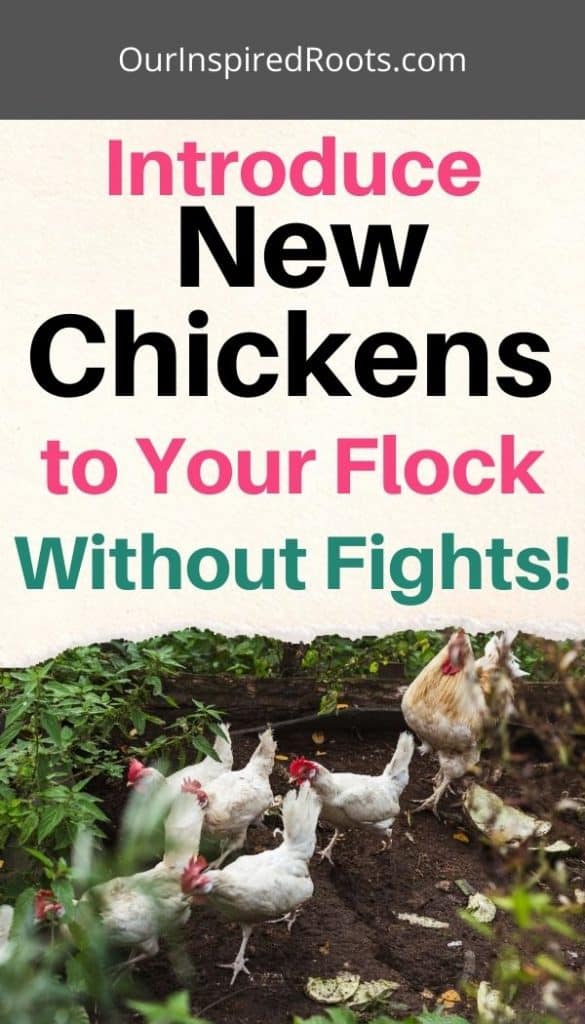 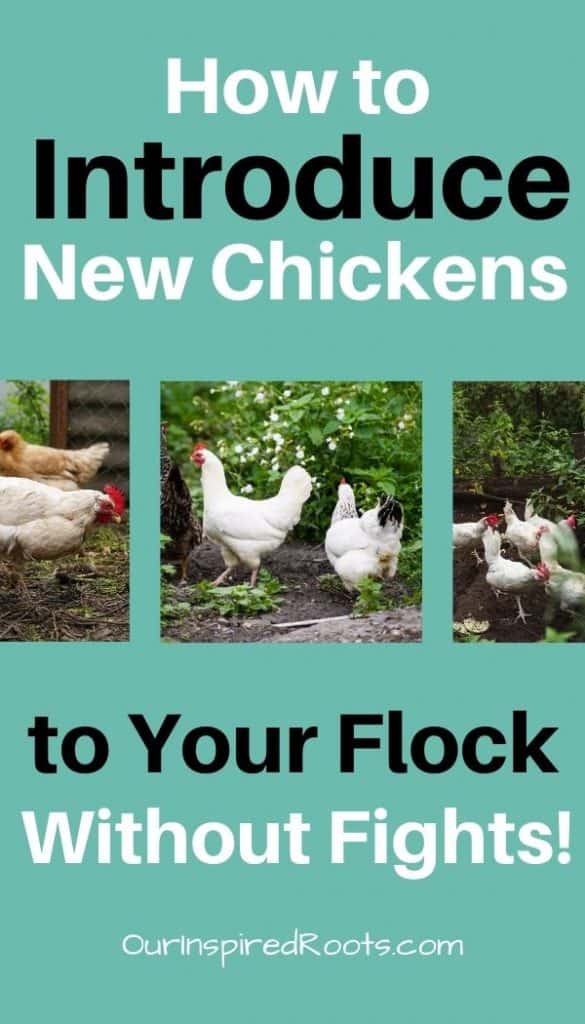 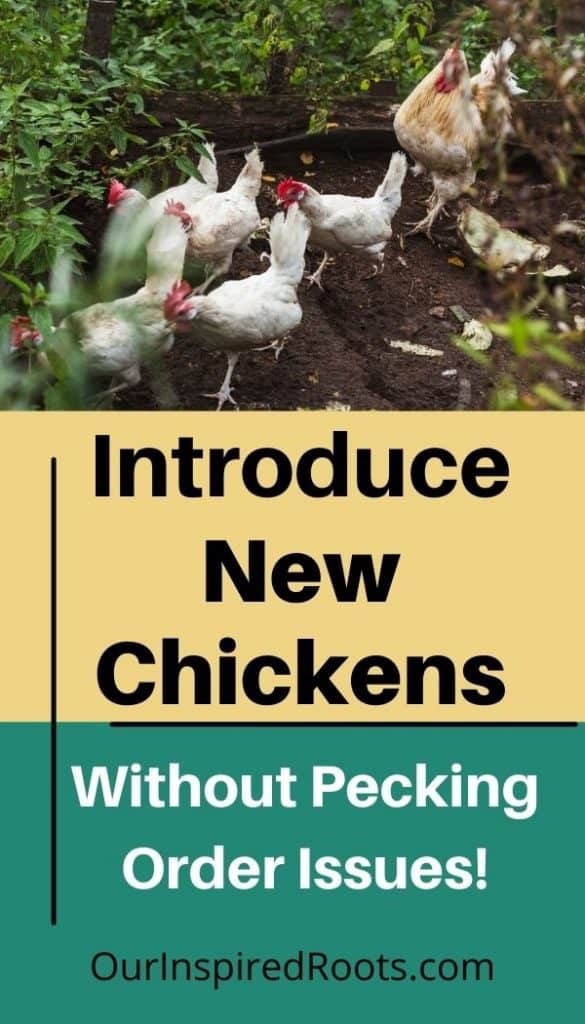 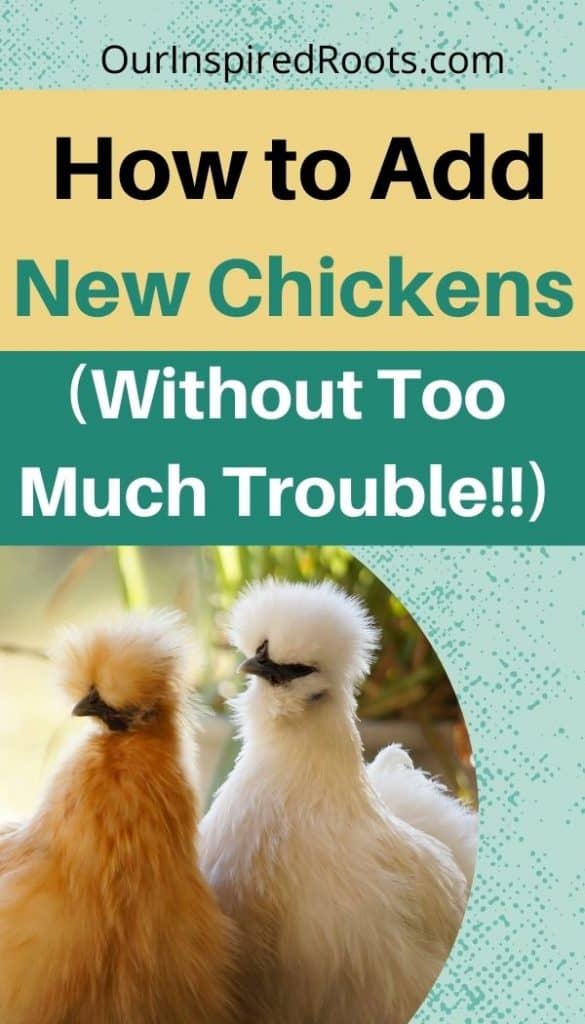 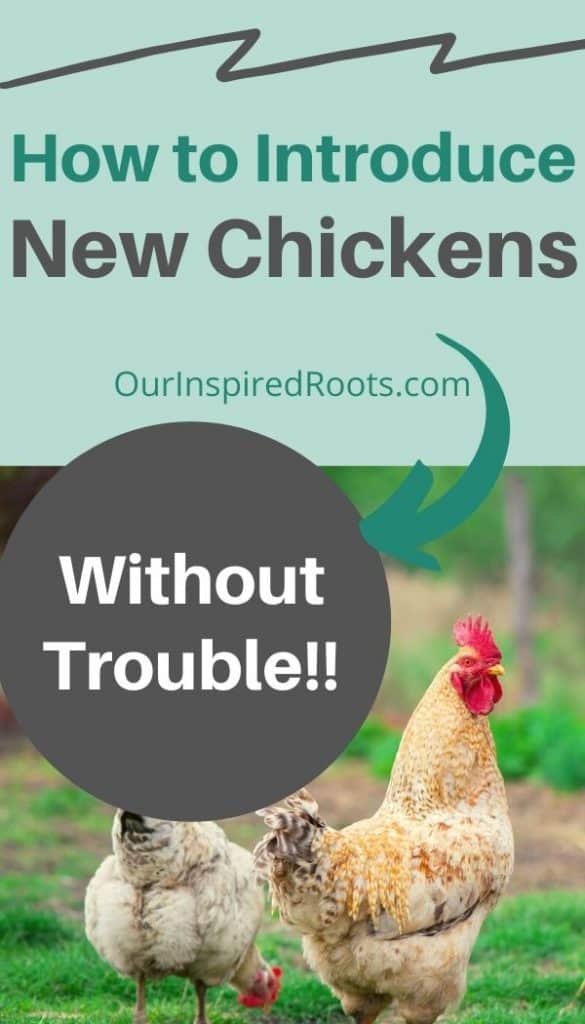 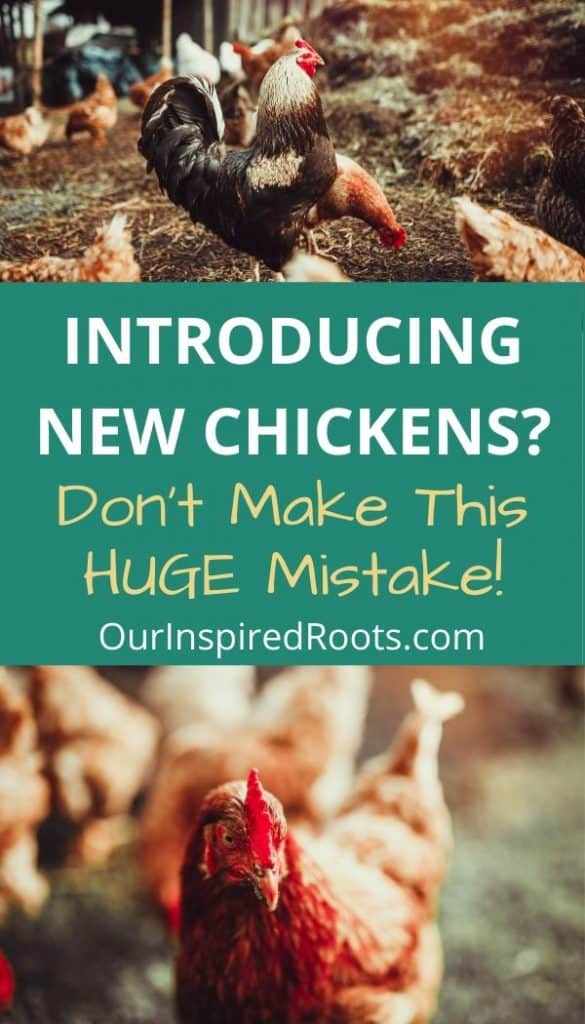 Introducing new chickens to your flock is something most chicken keepers have to figure out at some point.

When we tried introducing new chickens to our existing flock for the first time we made one huge mistake and learned the hard way what to do and what not to do.

Chickens are really serious about their pecking order. When introducing new chickens to your flock, older chickens will terrorize younger ones and can do significant damage if not introduced properly.

Whether you have a small backyard flock or a larger brood of chickens, in this post I’ll tell you how to introduce new chickens or pullets so that it goes as smoothly as possible.

What is the Pecking Order?

Chickens are social animals (just like humans!). They have an order to their social hierarchy that is determined by pecking, hence the “pecking order”.

Bigger, stronger, more aggressive chickens basically bully their way to the top, while smaller less aggressive (I’d even say pacifist) chickens are lower on the hierarchy.

If there is a rooster, he will be at the top of the pecking order. If not, a dominant hen will take that spot.

The pecking order is one reason that you don’t want to have a bunch of roosters in your flock. They may (will) kill each other for the top spot. You shouldn’t have more than 1 rooster for every 12-15 hens, but that’s a topic for another day.

How to Add New Chickens to the Flock

Introducing new chickens to your flock? Ideally, you would wait until your new chicks are about the same size as the older hens before combining them so that they have a better chance at defending themselves (though you can introduce smaller chickens which I talk about later).

If you are getting full-grown pullets, isolate your new chickens for at least 30 days. This is so that if they have any diseases they don’t spread to your flock.

If you are raising baby chicks you will be keeping them inside for a lot of this time anyway, so no need to isolate when they are full size.

After isolating new chickens you still need to keep them separate from your flock. This helps them get to know each other without being able to hurt each other.

How long you do this is up to you and may hinge on how your chickens are doing. But I would say at least a few days to a week or two.

You can do this with temporary fencing, a chicken tractor, or something else that allows them to see each other through the wire but not touch. Just be sure it is secure!

Unfortunately, the first time we integrated flocks we learned a terrible lesson. We needed to move the chicks out of the brooder for space so Matt sectioned off one side of the coop with chicken wire.

However, he must not have made it secure enough because one chick got into the hens’ side and [avert your eyes now if you are squeamish about injured animals] pecked it’s brains out, literally. It was devastating. We had to put it out of its misery. Lesson learned.

Let your chickens meet for the first time when you are available to watch them.

Don’t be afraid to bribe and distract them. If there are some tasty treats for everyone to feast on they may be less likely to focus on pecking each other.

Put out 2 bowls of food and 2 waterers so everyone can have some.

Remember that establishing the pecking order is an important part of chicken life and you are only there to keep anyone from getting seriously hurt.

Drawing blood is a sign that there is too much aggression and you need to pull back a bit.

Either remove the bully or if they are all bullies, consider waiting a little longer before physically introducing them (keep them in separation mode). It may even take a few attempts until everyone gets along.

If there is an older hen who is particularly aggressive and won’t let up, take her out of the flock for a few days (a dog crate works well). Once you reintroduce her she will be too worried about getting back into the pecking order to bother being a bully to the new chickens.

How to Integrate Baby Chickens into the Flock

The sequence above is ideal for introducing new chickens to your flock but not possible for everyone or every situation. You may not have a second location for growing pullets to live, for example.

We have successfully introduced 8-week-old chicks to our existing flock.

Here’s how we did it:

A chicken crib is just a place that smaller-than-full-sized chickens can go to get away from bigger hens. You can put food and water under it so that they have access to that too. The spaces are 3.5 inches wide.

I got this number from Justin Rhodes’ video on building a chicken crib. He measured his chickens, and since they were the same breed as our adult hens, I just used his number.

If you have something besides black australorps you may want to measure their chest for the right size (though my guess is any dual purpose bird would be similar size).

Here’s what our chicken crib looks like (upcycled from a pallet and leftover wood and roofing material):

Note that the far right side has a larger opening. We opened that up after they were all getting along so that the big ones could use it for shade too.

Wait Until They Are Big Enough

You shouldn’t put chicks outside without a heat source until they are fully feathered. This happens at around 6 weeks.

At 8 weeks we moved our chicks out to my existing flock who were already enjoying a brand new A-frame.

The chicks were big enough not to be able to fit through the electric poultry netting we have set up around the A-frame.

If you want to integrate smaller chicks just be sure they can’t get out of your fencing. You can wrap the bottom of the fencing with plastic netting like this if you’re concerned.

If your run area is fenced with chicken wire you should be fine.

Before we brought out the chicks we locked the older hens in the A-frame. This was mostly to be able to go back and forth grabbing the chicks from the other coop without worrying anyone would be too aggressive while we did it.

And nothing happened! Actually, some of the new chickens (probably the roos) were more aggressive towards the older ladies than the other way around. Go figure!

Introducing New Chickens to a Single Hen or Small Flock

Introducing new chickens to hens is always different. One reason that our introduction went so well could be because we only had 2 adult hens and were introducing 11 chicks.

If you have a small flock you want to add chicks to, keep in mind that it’s more like adding one or two hens to a chick flock.

Unless you have aggressive hens, adding chicks to such a small flock is unlikely to cause too much trouble.

I think it also helped that we had black australorps, who are very docile, and they were at the bottom of the pecking order in the last flock.

Also, it turned out we had about 5 roosters (the light colored ones above) so I think our hens were aware that they were no longer on the top of the pecking order pretty quickly!

So it all depends on your chickens, but I say go for it. You can easily remove and isolate the hens if needed.

If you have only 1 or 2 hens I’d say you should definitely introduce the younger ones earlier rather than later.

The reason is: your chicks have the benefit of already having a pecking order and your older hens have to fit into that.

If the chicks are a little smaller in size it gives the hens a little bit of an advantage so they aren’t picked on to much.

Introducing Chickens at Night: Does it Work?

I have tried reintroducing separated chickens by putting them in at night didn’t seem to help.

The concept is that when the chickens wake up with a new chicken in the coop they just assume the new chicken is supposed to be there.

I haven’t found this to be true.

I also don’t typically do this because if I’m not there at dawn to let them out and watch them, the new chicken may get bullied without me knowing.

How Long Does it Take for Hens to Accept New Hens?

The quick answer is: it depends.

As you can see there are many factors. In my experience though, barring a bully hen, it only takes a few days.

If you found this post on introducing new chickens to your flock helpful, share with a friend!