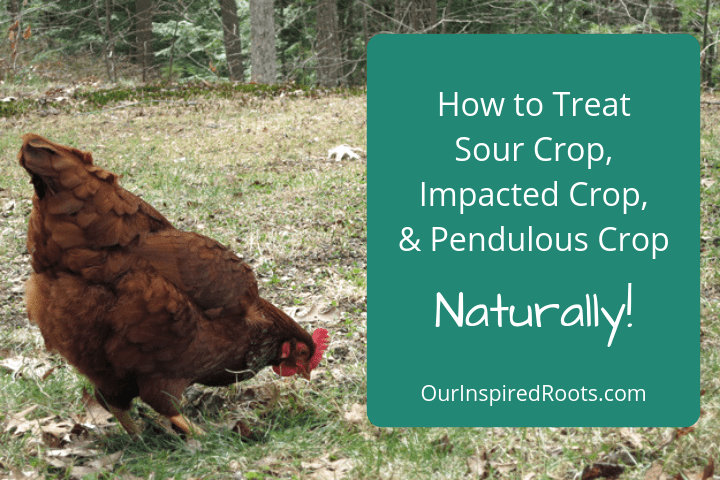 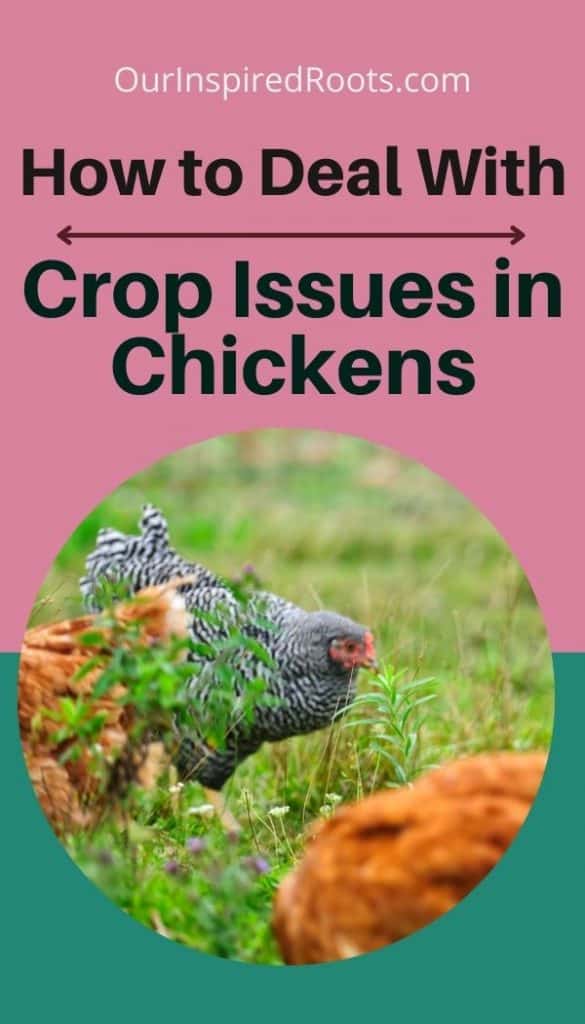 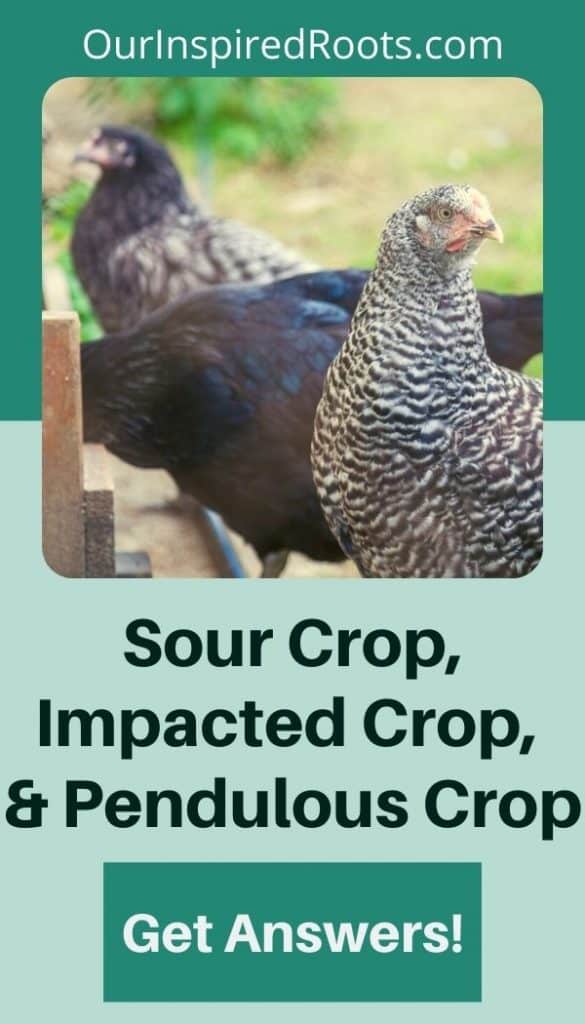 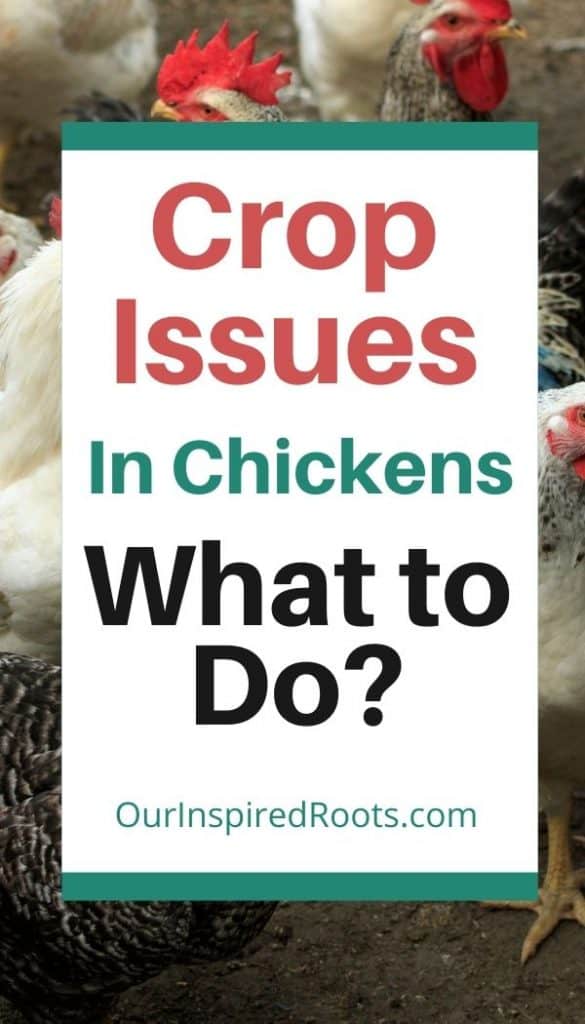 I’ve written about keeping chickens healthy in the winter but I didn’t realize that spring brings it’s own challenges, specifically, Impacted and sour crop.

One day I went out to the coop to check on the chickens while they were scratching around in the dirt. I noticed that one chicken, Slater, was not scratching around with the others and was perched on a low branch instead.

A little while later when I went back out she was still there perched on that branch sleeping. She wasn’t interested in any of the treats I was dishing out and wasn’t “playing” in the dirt with the others.

I started researching and quickly realized she had an impacted crop.

What is impacted crop and how does a chicken get it?

A crop is a little sack where a chicken’s food hangs out just after being swallowed and before going to the stomach (Proventriculus and gizzard). Food can hang out in there for a while waiting to be digested.

Impacted crop is when something, usually straw or dried grass, gets stuck in a tangled mess and blocks food from moving from the crop to the stomach.

How do I know if my chicken has an impacted crop?

To check your chicken’s crop, hold her like a football with beak pointing forward, you can reach around the front of the bird and find the crop, a small bulge, below her neck and above her chest.

The best way to prevent impacted crop is to offer granite grit, free choice, and limit your chickens’ access to long dry straw or grass. That may mean keeping your birds in their run until you cut the grass for the first time (when it’s green and lush) so they don’t eat the dead dry grass.

You need to break up the blockage. The best way to do that is with water and massage.

When you think you have removed the impaction:

If water alone doesn’t help break up the impaction you can try olive oil. Many chicken owners swear by it while others swear against it. The way I look at it is: if the oil will save her life and nothing else is working, then try it!

After we fixed the impaction we released Slater back into the flock. After a few days she looked ill again and soon we found out she had sour crop.

What is sour crop and how does a chicken get it?

Sour crop is basically a yeast infection in the chicken’s crop. It often occurs because of an impacted crop that hasn’t been cleared. Then yeast begins to grow and feed on the food that is stuck in the crop.

How do I know if my chicken has sour crop?

The best prevention for sour crop is, of course, to prevent an impaction, but there are other ways to reduce the risk of yeast growth. One tablespoon of apple cider vinegar to 1 gallon of water (don’t add ACV to a metal waterer as it can rust), as well as regular probiotics (mixed in food or in plain water), are great ways to reduce yeast and support overall chicken health.

If you suspect your chicken has sour crop you need to do two things – empty the crop and kill the yeast. First:

If the crop has still not emptied on its own then you may need to help your chicken to “throw up”. It’s not ideal and can be dangerous. But, as I said before, if it’s your last ditch effort to save her life, then do it.

When the crop is empty you will need to deal with the blockage that caused sour crop (follow the directions for impacted crop above). Once you believe the impaction has passed you can move onto recovery.

Some chicken keepers also recommend oil of oregano for crop issues but I haven’t personally tried it.

Many chicken keepers recommend plain yogurt to treat sour crop but I don’t use it. The only reason I can think of to give yogurt to a chicken is for the benefit of probiotics so I just give probiotics instead.

Some folks are strictly against applesauce for sour crop or impacted crop and others are for it. It’s best not to give sugar (including fruit) because it feeds the yeast. However, applesauce is easy to digest and a nice vessel for giving a sick chicken a probiotic. I think the benefits of the small amount of applesauce outweigh the risks.

If all else fails

Feed Nystatin (an antifungal). This is not a natural treatment but may be your last chance to get your chicken well.

Then crush the pill and add it to a tablespoon of applesauce and feed to your chicken twice a day.

You may be wondering if it’s safe to eat the eggs from a chicken being fed nystatin. I don’t know. However, I didn’t. I just saved the eggs she laid to feed back to her. 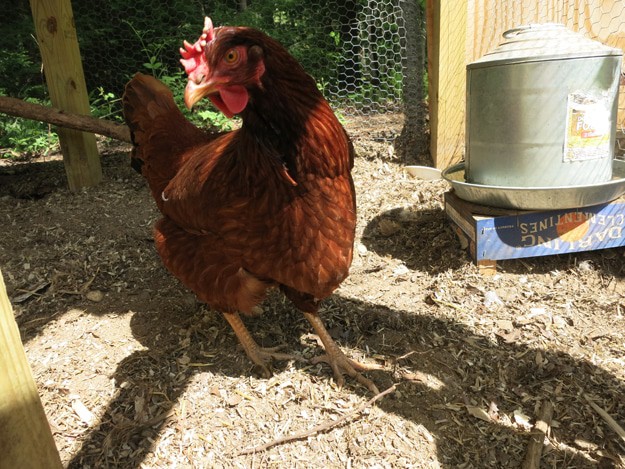 Pendulous crop is when a chicken’s crop (which is a muscle) has been damaged and no longer hold its shape. Unfortunately, once your chicken has pendulous crop, the crop no longer functions properly.

You can help her crop to work better by massaging it after she eats or making a crop bra to hold the pendulous crop up so that (hopefully) it will empty properly. However, you may have to decide if she is suffering and if it would be better to cull her.

When our chicken, Slater, had an impacted crop, sour crop, and pendulous crop she kept getting sour crop over and over. I now believe it’s because she had a pendulous crop from the initial impacted and sour crop. Every time we started feeding her normally again she would get food stuck in her crop (because it wasn’t working).

In retrospect, I would have put her out of her misery after a few recurring bouts of sour crop. She suffered quite a bit because I didn’t want to “give up”. You live and you learn, right?

How have you dealt with sour crop, impacted crop, and pendulous crop? 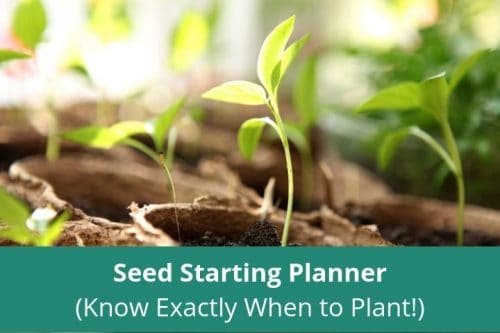