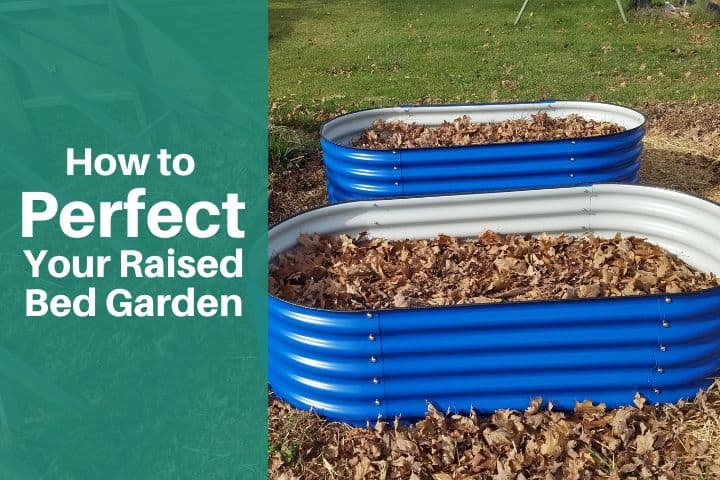 Raised bed gardens are a great way to get started with growing your own food right away. But if you have never used raised garden beds before, you might have some questions. So, I’m answering the most common questions and concerns about raised beds below!

(Disclosure: I received an Olle Gardens raised bed kit in exchange for my review but all opinions are my own.)

Many people wonder what the benefits of raised bed gardens are. Here are some of the ways raised garden beds are ideal:

While raised beds aren’t always the best choice for a space, they do offer many benefits that many gardeners like to take advantage of. But there are also many ways to create raised beds in your garden, so let’s explore that next.

There are limitless ways to build raised beds. As long as you have a raised bed material that is safe for growing food in, you can build a raised bed. But, for the most part, raised beds will be made from wood or metal. But which one is best? Here are my thoughts:

Building raised beds from pine is a quick, easy, and cheap solution for raised beds. Untreated wood is a safe material for your raised beds and pine is easily accessible and relatively inexpensive (though prices of all lumber have shot up since 2020).

Learn how to build your own wooden raised beds.

However, pine will not last very long — 5 years or so. Once the bed starts breaking down, you need to replace it. If you let pine raised beds go too long without replacing, they will start to become one with the surrounding landscape (ask me how I know!) and it becomes VERY difficult to remove them and replace them.

Cedar or redwood raised beds are longer lasting (10-20 years) than pine but are also MUCH more expensive.

Metal raised beds are also very modern looking and come in many colors, so you can make your space look exactly the way you want it to.

How to Fill Raised Garden Beds

What Do I Put on the Bottom of a Raised Garden Bed?

I recommend filling the bottom of your raised bed with organic materials such as small sticks and brush, fallen leaves, straw, and even kitchen scraps (though it’s best to avoid seeds). Then top the bed off with the topsoil of your choice.

Here’s what I do:

In this picture you can see the start of adding brush and fallen branches. I didin’t get a picture when Iwas done adding them!

After adding yard brush and fallen branches I add another mulch material like fallen leaves.

It’s that simple! Filling raised garden beds doesn’t have to be difficult or expensive. Each year the soil will settle a bit and you will need to add compost or soil to the top.

So, once you have your organic materials at the bottom of the bed, what kind of soil should you put on top?

I would recommend simply using compost if you have it. Compost is full of organic matter that plants need.

It will also help the organic matter in the bottom of the bed start breaking down without depleting the soil. However, you could also use a mixture of compost (even worm compost), manure, and garden soil.

Since it’s November in NH as I set up these beds, I’m waiting until spring to add the compost/soil. When I add it, I will take another picture!

Do Raised Garden Beds have a Bottom? Do They Need Drainage?

Yes, they do need drainage, but raised beds are bottomless, so as long as the soil you add to the bed is good soil (i.e. not clay) your drainage will be fine. No need to do anything else!

If your raised bed is not bottomless, then what you actually have is a container garden.

How Deep Should a Raised Garden Bed Be?

The minimum height for a raised bed is 10 inches if it’s on the ground (not on concrete or another hard surface). But you can have a raised bed that is much higher.

The raised bed kit I received from Olle Gardens is a modular raised bed, meaning you can create 1 of 4 different configurations. I chose two 63×31.5-inch raised beds that are 17 inches high, but you could also make one extra deep raised bed from this kit.

The 17-inch height is perfect for me, but I know some older folks and those with health issues difficult find that a taller raised bed is better for them.

What I Think About the Olle Gardens Metal Raised Bed

I’m becoming a big fan of metal raised beds which is a bit of a surprise to me.

I like that they last a long time (20 years or more!) and that even when their time is up, they aren’t going to become part of the surrounding environment to the point where it becomes impossible to replace them (yes, I have had a bad experience with neglected pine raised beds!).

I also like that I will be able to take them when I move to a new home.

The Olle Gardens raised bed kit was really easy to assemble (it took me less than an hour to complete) and looks great.

However, I needed to use the long screws in the configuration I chose as well since there weren’t enough short ones. I didn’t love this, so I asked Olle Gardens to send me some extra short screws and they did without any problem.

I can’t say how well things are growing in the raised beds since the season is over and I haven’t used them yet, but these metal raised beds are sturdy and high quality, so I have no concerns about them!

Is Your Raised Bed Garden a Vision of Perfection?

Raised beds have many benefits, including being more visually appealing and orderly, making it much easier to get growing right away, and working well for areas where native soil is not ideal. It’s simple to start using raised garden beds and is a great choice for many people.

Do you use raised beds? What are your reasons?