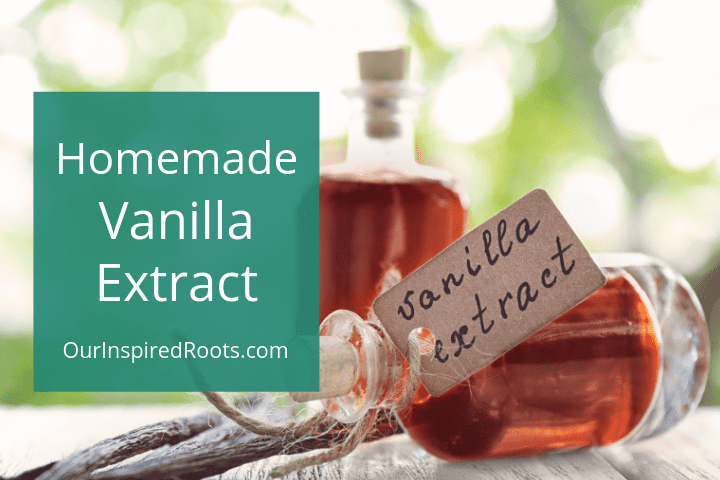 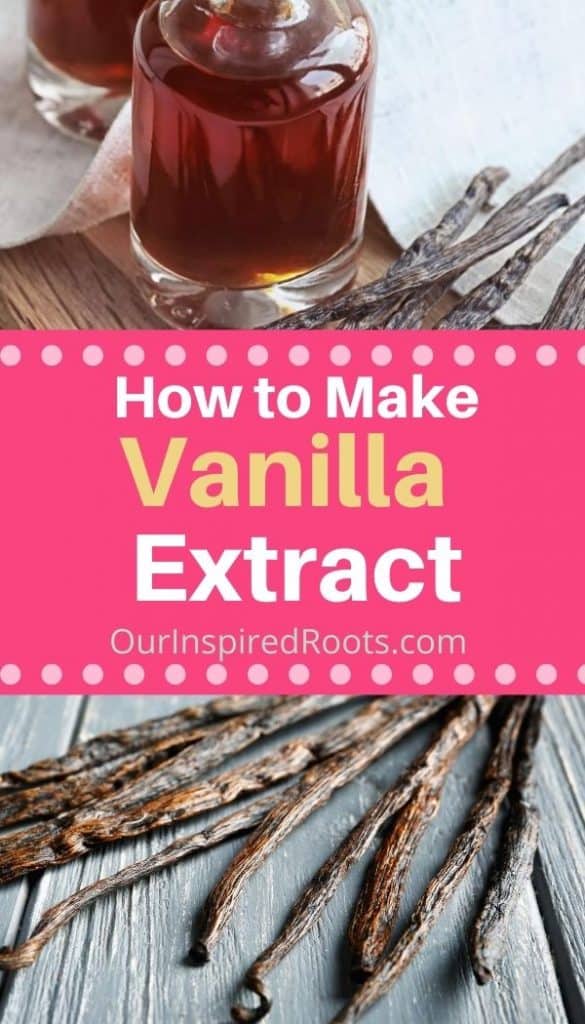 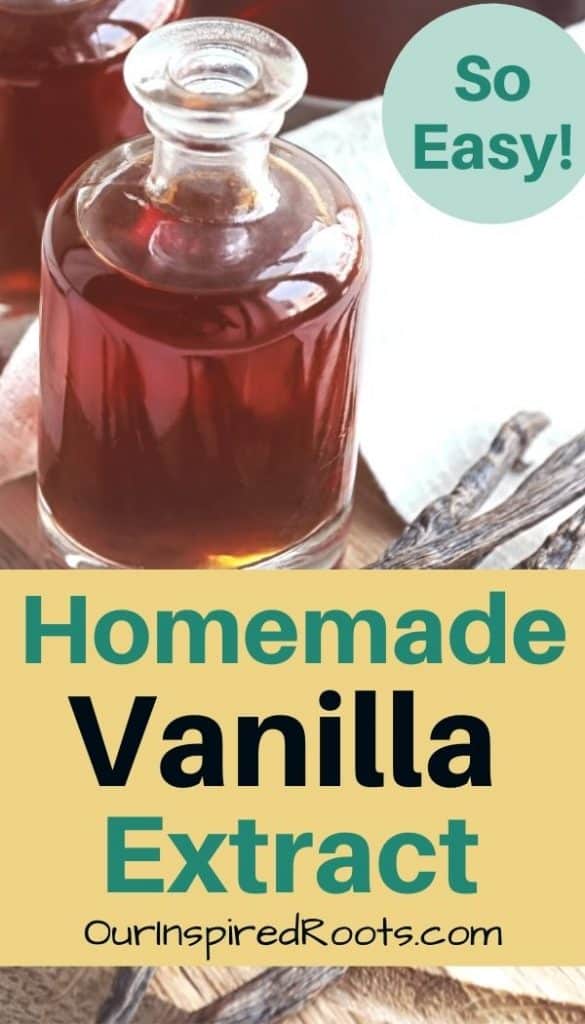 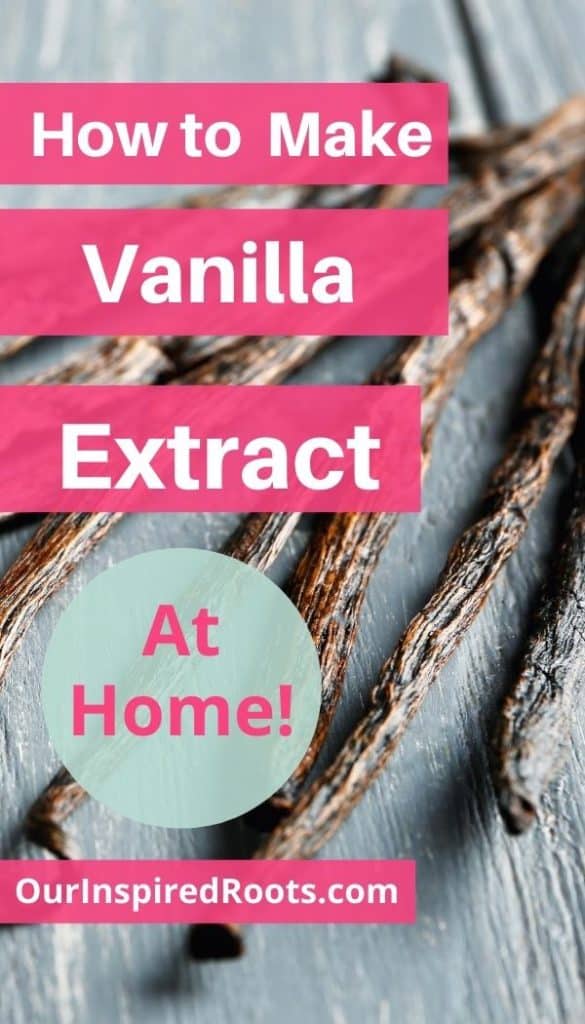 This homemade vanilla extract recipe is really simple to make and a great alternative to pricey store-bought vanilla or imitation vanilla.

I love to add pure vanilla extract to smoothies, dairy-free coconut yogurt, cookies, whipped coconut cream, and any other treat I want to have a rich flavor.

Vanilla also makes a great gift which is why I make it in small bottles. Learn how to make vanilla below!

This is the real question! Homemade vanilla extract is definitely better than imitation vanilla in taste and in quality. Imitation vanilla is made from coal tar, paper waste, pine bark, and even cow poop, according to Business Insider. I prefer real vanilla!

It’s often better than many grocery store pure vanilla brands too. This may be because the ratio of vanilla to alcohol is lower than I use in my vanilla extract.

However, the price tag on those tiny bottles of pure vanilla extract is huge! So, I always prefer to make it myself if possible.

How Much Does it Cost to Make Homemade Vanilla?

You may be wondering what the cost of making this extract is exactly. Vanilla beans are pretty expensive, but you only need a few of them to make a lot of vanilla extract.

The other is making never ending vanilla extract. This is my personal favorite. For neverending vanilla you simply leave the beans in the (opaque) jar and add more alcohol as needed to cover the beans.

Obviously the beans will be spent at some point, but doing this makes it last a long time (and you don’t risk wasting beans!).

The “fold” of a vanilla is a fancy way of saying how concentrated it is. Single fold vanilla is what you will most likely find in grocery stores. It passes the FDA’s guidelines for how much vanilla to liquid should be in an extract (about 13 oz of vanilla in a gallon of liquid).

This recipe is somewhere between two-fold and three-fold when it starts out. After you add additional alcohol to the neverending vanilla it will slowly get weaker over time.

How Is Vanilla Extract Made?

Making homemade vanilla extract is very easy. All you need is a few vanilla beans, some alcohol (the kind you drink), and a little bit of time. The vanilla beans sit in the vodka releasing their amazing flavor for a few weeks. Here are the basic for how to do it:

What Kind of Alcohol Should I Use for Vanilla Extract?

Vodka is the most common alcohol for vanilla extract but you can also use bourbon or rum. I like vodka because the flavor is neutral and doesn’t interfere with the flavor of the vanilla beans.

Which type of Vanilla Beans Should I Buy?

There are a number of different kinds of vanilla beans from different parts of the world. You may notice that the vanilla from each of these tastes slightly different. I have always used Madagascar vanilla beans and have been very happy with them. If you’re unsure of which ones to sue, choose Madagascar. Some other vanilla bean options include:

Additionally, vanilla beans come in two grades – A and B. Grade B vanilla beans are less attractive, dryer, and less expensive than Grade A, making them a good choice for extract. However, you can use grade A if you like.

Can I Make Vanilla Extract Without Alcohol?

Yes! Just use food-grade glycerin in place of the alcohol. You can get a better idea of how to do that in this post on how to make a tincture (yes, extracts are tinctures!).

However, alcohol does a much better job of extracting the flavor, so you may need to add extra vanilla beans to the bottle.

How Long Does Vanilla Extract Last?

The vanilla beans will last indefinitely (the alcohol preserves them) as long as they are covered by alcohol. So, just keep adding vodka!

It might be a good idea to have 2 or 3 bottles in rotation so you can always have some vanilla while the others are soaking. The extract itself will also last indefinitely (but I recommend using it within about 5 years).

Make your own vanilla extract at home with this recipe!

You can also make this in a mason jar.

How to use Vanilla Extract

Homemade Vanilla can be used any way that store-bought vanilla can be. Here are some ideas:

Vanilla is so versatile it has many uses in the kitchen and around the house!

Have you ever made vanilla extract? What is your favorite thing to make at home instead of buy in the store?