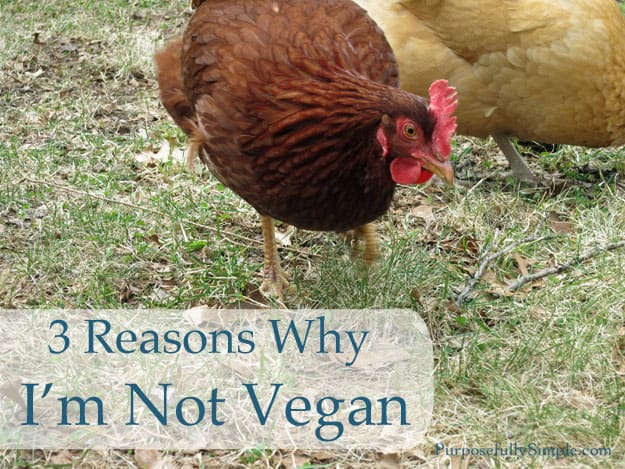 Wondering why some people choose not to be vegan? Below are my reasons for making meat a part of my healthy living journey and a part of my life on a homestead.

But I want to start by saying: I don’t hate vegans and this is not about why vegans are wrong.

I believe everyone needs to make his or her own choices in life and one way of eating may not work for everyone.

The point of this post is to give arguments against veganism to show the other side and explain why I choose not to be vegan.

Some people believe veganism is healthier. Studies show people who eat animal products are at higher risk for many diseases.

Firstly, I believe that a vegan diet can make some people healthier. For example, if they go from eating conventional bacon for breakfast to eating veggies, fruit, nuts, and seeds instead.

But I don’t believe animal products, in general, are the reason many people have discovered health benefits from a vegan diet.

A vegan diet is naturally higher in veggies and fruits, which would be a great thing for someone who never ate them before.

Studies are Not Perfect

So, I would guess that the studies that point to vegans being healthier than meat-eaters were performed with vegans vs. people eating conventional animal products and possibly a standard American diet.

I don’t think this is a fair comparison. In my experience, eating small amounts of animal products along with lots of vegetables has only improved my health.

Many people who choose vegan or vegetarianism are health conscious. That means they are likely doing other things in their lives to improve their health like not smoke or drink in excess.

They are also more likely to eat more vegetables and stay away from sugar.

If the meat-eating group in the study were a group of health-conscious, nonsmoking people too and if they chose only organic, grass-fed animal products, I would highly doubt there would be any correlation between veganism and better health.

We can agree on one thing though — conventional animal products are not healthy and do cause health problems.

Pastured animal products, on the other hand, are very healthy when eaten in moderation and with lots of vegetables. Grass-fed beef is ½ to 1/3 as fatty as grain fed beef.

Additionally, grass-fed beef provides two to six times as much healthy omega 3 fatty acids as conventional beef. Omega 3’s are an essential part of a healthy lifestyle, including lowering the risk of heart disease by as much as 50%!

Eggs from pastured chickens can contain as much as 20 times the amount of omega 3’s as conventional eggs. Source

Yes, you can supplement to make up for the lack of omega 3’s but I prefer to get as much of my nutrition from food before resorting to supplements. Nutrients from food are almost always easier for the body to absorb and assimilate.

Say No To Soy

What is very concerning to me about a vegan diet is the huge amount of processed soy products that many vegans rely on for protein. Soy is incredibly unhealthy.

Soy can cause infertility, malabsorption of nutrients, and digestive and gut problems among other things. Eating soy increases your body’s need for vitamins and nutrients including vitamin B12, something non-meat eaters are often deficient in.

Also, there are other food products out there that are vegan but definitely NOT healthy. Here’s a list of just a few of the junk food that is vegan.

Therefore, vegan is not synonymous with healthy. Neither is non-vegan for that matter. The important thing is to eat a varied diet of real food that includes lots of vegetables for the best health benefits.

There is a Way to Be an Ethical Meat Consumer

I do agree that it’s not ethical to eat conventional animal products. But I also believe that we can be ethical meat, egg, and dairy consumers.

We need to remember though, that many living creatures die every day for the production of grain or vegetables. Plowing kills moles, mice, snakes, lizards, etc. and turning any piece of land into cropland destroys the home and food supply of many other animals.

Not to mention the animal and human lives that are affected by chemical fertilizers and pesticides that threaten biodiversity. The point is, again, to avoid conventional food in favor of ethically grown and raised food.

We also have to consider how a vegan diet can affect people in other parts of the world. For example, some people in Bolivia can’t afford quinoa anymore, their traditional staple food, because it’s become so popular in the U.S. (source)

What my goals are for my food is to grow or raise as much of it as I can myself. That way I can be sure that animals are raised and slaughtered as ethically as possible.

Who Decides What an Animal Thinks or Feels?

I believe ethically raised animals’ lives are their own. My chickens are fed and kept safe in our yard. If it weren’t for our chicken coop and run most of them would be dead.

That is just the nature of an animal so low on the food chain. Their lives are fast. They turn into food for foxes and other predators. I believe they are happy.

As for their eggs, many animals take eggs from birds. If we weren’t taking them then someone else would (mice? raccoons?).

Nature is perfect and works on such an intricate level that most of us are totally unaware of the interworking of plants, animals, and earth in an ecosystem.

Yes, hens are bred to lay more eggs and for other attributes, but I don’t think that changes the fact that bird eggs have always been food for other animals.

Animals Can Be Part of a Sustainable Farm or Homestead

Again, I believe we can be ethical animal product consumers. That means supporting renewable agriculture, employing permaculture, and making the best choices we can for our homesteads.

The grains that are grown to feed cattle are largely GMO corn and soy, which are grown in an unsustainable way. Therefore, it doesn’t really matter if the grains go to humans or animals, the practice is unsustainable already. As Dawn Gifford at Small Footprint Family writes:

“But here’s where the vegetarian argument ends: Whether you feed the corn to livestock or people doesn’t matter. A conventionally farmed corn or soybean field is a major source of greenhouse gases, air and water pollution either way. But a permanent pasture is a biodiverse, ever-cycling pump that continuously pushes carbon back into the soil where it increases fertility and builds topsoil.” Read more

Choosing a vegetarian or vegan diet over a diet full of conventional meat, dairy and eggs may be more sustainable. But a diet made up of sustainably raised animal products and sustainably grown veggies and fruits is just as sustainable (or more so!).

When I first wrote this post I was eating meat and eggs but not dairy. I was also eating gluten-free. We had chickens that were fed organic feed and let out to forage as often as possible.

I bought grass-fed beef or organic pastured chicken whenever possible. I was also incorporating many real food vegetarian and vegan dishes into our diet.

Now, I am eating an AIP diet and my family leans toward paleo. The reason is that grains and legumes are not healthy, certainly not in the amount many Americans eat them.

Both grains and legumes contain anti-nutrients that make getting nutrients out of these foods difficult. This is a topic that would require an entire post to explain, so if you’re interested in learning more, start here.

Additionally, there are some essential nutrients that are difficult or impossible to get without animal products.

Additionally, all healing diets I know of include high-quality meat. This makes me think that not only is eating meat ok, but it’s also necessary for optimal health. If we were designed to eat meat (we are) there must be a way to do it “right”.

And that’s what I’m trying to do. My goal is to grow and raise as much of my own food as possible so I can be intricately involved in making it as ethical and sustainable as possible.

How Can You Care for an Animal and Then Kill And Eat It?

This is a big question homesteading meat-eaters like myself get from vegans. But the first thing that pops into my head is: How can you not?

I could let someone else do all of the raising and butchering for me (as many people do) and pretend like it’s not happening, but I don’t feel like that’s right.

So why would I buy meat from a source that treats their animals badly so that I don’t have to eat the meat I raise humanely?

It’s not easy. I don’t know anyone who takes killing an animal lightly. It’s serious and it is sad. But there is also so much gratitude toward the animal and there is so much more connection to the cycles of life.

If you never want to kill an animal, that’s fine! Be a vegan or vegetarian if you want to be. For me, my decision is different. I am going to eat meat, and I want the best quality and most humanely raised meat I can find.

That means potentially raising it myself. And that also means the need to care for an animal that I know will one day be on my plate.

Caring for/loving an animal and butchering an animal for food are not mutually exclusive as far as I’m concerned.

I admire anyone who makes choices in their life to try and be as ethical and sustainable as possible. For some people that means avoiding animal products. For me, it’s getting as close to my food as I can.

Do you eat animal products? Why or why not?